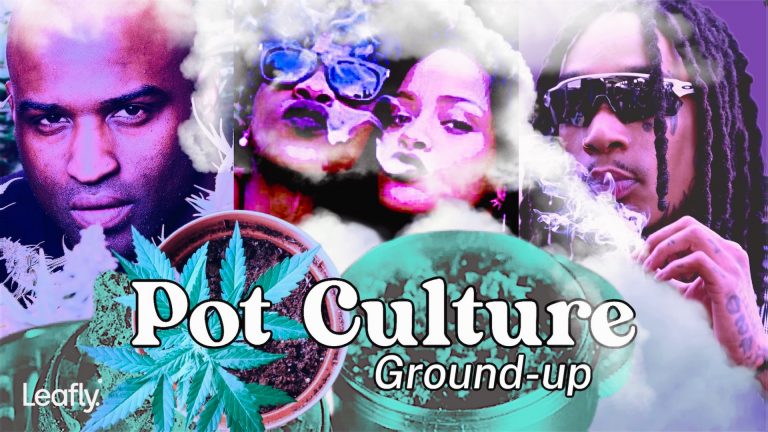 There have been some huge stories in weed and pop culture so far in 2022, and we’re not even into spring! Check out these pop culture moments and stay up to date on what’s trending with our Pot Culture Ground-up.

Rap superstar Wiz Khalifa is using his cultural influence to cash in on legal cannabis, to the tune of $45 million.

“Wiz Khalifa cashed in on the cannabis revolution with products including his Khalifa Kush (and got a big boost from quietly selling a chunk of his publishing in April).”

Here’s why it’s important for the weed industry:

Many legal weed brands leverage the cultural influence of music, sports, and entertainment to leave a mark with consumers.

2020 Leafly Strain of the Year, Runtz, and multi-state empire Cookies were built by independent rappers who can fluently navigate the web, the streets, and balance sheets.

Like cannabis, music’s value to consumers is intangible. Without influencers like Khalifa, Berner, and Yung LB, corporations would not be able to traffic these massively-valuable commodities. As the industry grows, it’s important for everyone involved to honor and protect the legacy grower and seller cultures that made the legal industry possible. And to never forget that many pioneers are still paying for the unfair criminalization of the plant while we reap the legal benefits.

Rihanna’s friends allegedly knew she was pregnant before she said anything. How? Because she stopped smoking weed.

This clip of the pop princess brushing off a paparazzo who blurted, “you’re late,” as she arrived at a fashion show suggests she might be wishing she could spark one. “No shit,” she shot back instantly. Seems like the world’s sexiest stoner has even less time for the BS than usual.

Scientists are finally studying how weed impacts professional and amateur athletes. But anecdotal data from athletes who had to consume in the shadows because of rules and stigmas are also valuable to our understanding.

Brittney Griner is not alone: Here’s why pro athletes are using cannabis

NFL and NCAA record-breaker Ricky Williams got blunt about his experience using the plant as an elite athlete.

He revealed he smoked before some of his most historic games in college, and that he got caught in the NFL’s substance abuse problem because of a misunderstanding about testing schedules when he changed teams.

On the stigmas athletes face about weed:

He continued, “When I went to college, the guys were just hanging out, the upperclassmen in the room playing cards, shooting dice, and they were passing the blunt around… I’m hitting it, and I just noticed that it was cool. We just were all having a good time.”

He used cannabis moderately until his senior year at Texas. Williams could have left school and been a top NFL pick, but he put all his eggs on winning college’s prestigious Heisman Trophy, for the nation’s most outstanding player.

His senior season started rough on the field, and his girlfriend broke up with him and got with the team’s quarterback. He was feeling down. Then his roommate pulled a bong out and set him on a historic path.

Keep an eye on Williams’ Highsman brand, which is aiming to bring cannabis products for sports fans to use while viewing. The products come endorsed by the biggest names across the world of sports, and could help put bud on the same level as beer across athletics.

In a mind-elevating interview with On the Revel, the man who gave us weed anthems like “Good Times (I Get High)” spoke candidly about the current state of the plant.

Styles P on when and why he started smoking:

“I’m a fidgety person by nature, I’m really anxious, I’m always moving, so cannabis sort of levels me out.”

On the need for social equity in cannabis industry:

“Everybody I know in my neighborhood – we don’t grow fucking pot. We’ve all got (too) many arrests on our sheets for pot. It’s the white people that grow the most awesome pot. I fucking love that.

I’m just going to be honest: You guys grow the pot, you never go to jail for it, make tons of fucking money for it. We buy the pot that you grow, it fucks up our future, we get arrested for it, now you got a felony and a bunch of misdemeanors, now you can’t get a job.

How the fuck do we fix the problem? By addressing the problem. Let’s figure out how to get some of these Black kids some money over this fucking pot.”

More OGs get their flowers

NYC weed pioneer Branson got a shoutout in some of the archival footage used in Netflix’s new Kanye West documentary. In ’90s footage with a young Kanye, Harlem rapper Ma$e and his friends give a quick shout-out to cannabis pioneer Branson.

Weed memes that show the stoner’s struggle to score

Ever had a grown adult bite the blunt right out of your mouth? Dealer’s phone ever went straight to voicemail right as you pulled up? Or maybe his mom won’t give him a ride to drop off your order–or maybe that kind of stuff just happens in the memes below.

These viral posts will make you thankful for Leafly Pickup and Delivery services, now serving 36 states, and Washington D.C.

Click here to learn about how to use Leafly Pickup and Delivery in your area.