Watch this: How one man’s quest revived the Fabulous Furry Freak Brothers 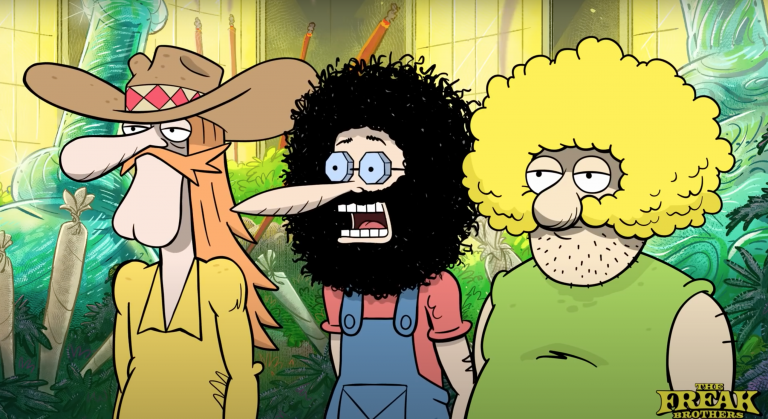 The phoenix-like rebirth of the Fabulous Furry Freak Brothers—arisen from the ashes of their own smoked-up 70s stash—just might be the ultimate Ripped Van Winkle story. On Tubi this weekend, the three iconic stoners are being revived in the age of legalization, with their counterculture street cred still intact.

Freewheelin’ Franklin, Phineas and Fat Freddy—collectively and affectionately known as the Freaks—made their debut in 1968, when series creator Gilbert Shelton invented them as part of a one-off ad campaign for a no-budget film called Texas Hippies March on the Capitol.

The movie made no impression and has since been lost to history, but the freaks would freak on, selling over 40 million copies of their collected adventures, translated into 15 languages.

Over the years, many attempts to adapt their uniquely weedy world for film and television have lit up and burned out, with nothing more than a few minutes of test claymation to show for it.

But now, at long last, a new animated series will reboot their adventures for the modern era. Pete Davidson, Woody Harrelson, and John Goodman give voice to the titular roles, with Tiffany Haddish providing the voice of their cat—a character so popular in the original comic that it gave rise to its own spin-off series. Workaholics stars Adam Devine and Blake Anderson serve as the new show’s executive producers and also voice two new characters created especially for the animated series, The Freak Brothers, which debuts on Tubi on Sunday, Nov. 14.

This is the story of how an underground comic about cannabis-obsessed anarchist “freaks” became an antiestablishment sensation, then fell into obscurity, while its creator retreated into reclusion—only to see his life’s work lovingly resurrected, refreshed and revived by a new generation of Hollywood weed enthusiasts.

Gilbert Sullivan attended the University of Texas at Austin off-and-on for nearly a decade, primarily as a means of avoiding the Vietnam draft. He found his people at the Texas Ranger, a notorious campus humor magazine that nurtured several other seminal underground comic artists.

Austin at the time was a center of radical politics and what was known then as the drug culture. The town’s relative proximity to Mexico assured a steady supply of low-cost seedy cannabis, and real-life versions of seedy characters like Freewheelin’ Frank abounded.

“I first smoked marijuana in 1959 while I was going to the University of Texas.” Sullivan once recalled in an interview. “On the rare occasion when anyone would have marijuana to smoke we would all go into the bathroom and shut the door and put a towel under the crack in the door so that the smoke wouldn’t escape and get out of the house and go down to the police station four miles away and cause the police to come and arrest us all.”

Naturally, there’s been much speculation over the years that all three Freak Brothers (who are not biologically related) were modeled off of their creator’s social circle in Austin, which was certainly known to smoke its share of grass.

“The Freak Brothers are part of a tradition of characters who live on the edges of society,” Shelton once told Texas Monthly. “Dope is only part of it.”

Driven out of Austin by a cop crackdown

In 1968, just a year after publishing his first-ever Freak Brothers comic strip, Gilbert Shelton fled what Texas Monthly described as a “police crackdown” on hippies in Austin, eventually settling like so many seekers of the day in San Francisco.

Just as the newly opened Fillmore West ballroom served as the worldwide epicenter of psychedelic rock music, the City by the Bay also attracted an unparalleled influx of underground comic talent.

Zap Comix formed in San Francisco that year and put out Zap #1 as a showcase for the work of R. Crumb—including classic characters like Mr. Natural, and images like “Keep on Truckin,’” which was kind of an analog meme of its time.

Bought their own printing press

This was back when “press” was not a term of art. The four friends literally purchased a used Davidson 233 offset printing press and set up shop in the back of a novelty store.

Originally they planned to make a living designing and printing posters promoting rock concerts, while putting out their own work and a small selection of titles from artists too controversial for the mainstream press. But when the underground comix scene took off, Rip Off Press went full-time into publishing.

Shelton didn’t entirely lose the affinity for music illustration, though. He’d eventually lend his talents to the Grateful Dead, illustrating the cover their 1978 album Shakedown Street.

The Fabulous Furry Freak Brothers gained a national audience in the early 1970s when they began appearing in underground newspapers across the country.

A two-year-run in the pages of High Times during the magazine’s heyday (1976—1978) brought the brothers’ adventures to an even wider audience. But that’s about it when it comes to mainstream exposure—if you can call running alongside ads for clean urine and coke spoons mainstream.

Alt heroes of the counterculture

So why did the story of three weed-obsessed burnout friends and their equally-inebriated cat stick around for so long?

Amid all the political and cultural turmoil that went down during their long print run, Phineas, Freewheeling Frank and Fat Freddy held tight their place in the heart of the world’s hardcore stoners by being willing to do anything to score some weed, while forever thumbing their noses at the establishment.

Even the Freak Brothers’ main antagonist—Notorious Norbert the Nark, an avaricious and incompetent cop—seems ripped from today’s headlines.

In 1979, Gilbert Shelton and his wife, the literary agent Lora Fountain, left the United States for life abroad in Europe. He continued to publish new Freak Brothers comics until 1997, at which point he became something of a recluse, popping up only occasionally at a conference or a speaking engagement.

By the time Courtney Solomon went looking for him, he was pretty hard to find.

A quest to revive the Brothers

Solomon has been producing and directing films since 2000, when he brought Dungeons and Dragons—another bit of beloved but forgotten IP— to the big screen. Solomon, the producer who originated the idea of a Freak Brothers revival, traces his affection for the Brothers to a teenage trip to Amsterdam, where he found a copy in a head shop, brought it with him to a coffeeshop, and spent the rest of the day lighting up and laughing.

Roughly 25 years after that Amsterdam afternoon, Solomon decided to track down Gilbert Sullivan and convince him to approve an animated series that would be true to the original, but set in modern times. After a six-month search, he found the great artist living outside Paris—his ashtray overflowing with roaches, his mind still wary of authority in all forms, including Hollywood.

Ultimately, Solomon convinced him to give Hollywood one last try with a pitch as funny, dumb, clever, obvious, and inventive as anything found in the original comic: The Freak Brothers of the 1970s smoke some shit so good they pass out for 50 years and wake up in modern-day San Francisco. While not a writer on the new animated series, Shelton has given his blessing and offered input at every step.

So what happens next? How do the Freak Brothers fare in a world where weed is legal but the man still cracks skulls?

You’ll have to turn on, tune in and find out.