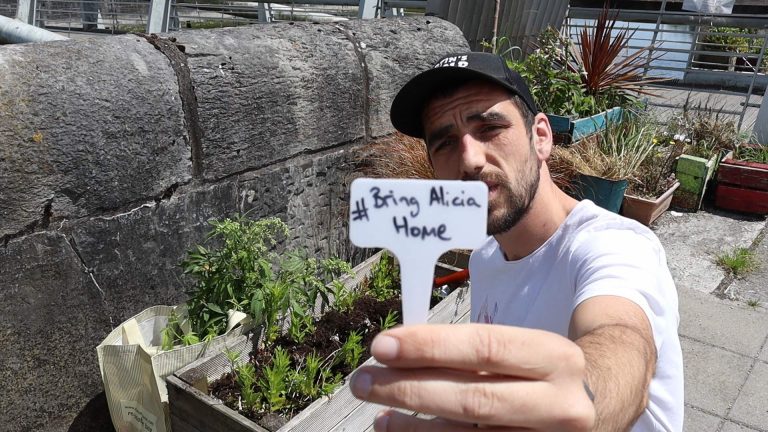 Martin Condon may be infamous throughout Ireland for planting pot in public as a protest against prohibition, but he actually started out campaigning against cannabis.

As a teenager, he once confronted his cousin, telling him to stop smoking weed immediately or it would rot his brain. Then he repeated a bunch of propaganda he’d heard at school and absorbed through the media.

But Condon’s beliefs about cannabis weren’t very deeply held, as evidenced by the fact that the very same cousin soon after convinced him to try it for himself. Almost immediately he felt benefits that went far beyond simply getting high.

“I think it was the first time I was able to really engage with my own thoughts,” Martin told Leafly in a recent interview from him home in the Irish city of Cork. “It grounded me and made me more present.”

Helped him with ADHD

More than a decade later, he now understands that many studies have shown cannabis to have clear benefits for those with ADHD, and there’s an active community of people online sharing anecdotal stories. But at the time, he only knew that cannabis helped him think and function better.

Condon discovered that cannabis helped his ADHD. Dozens of run-ins with the law followed.

Growing up in Cork, Ireland, however, the plant was illegal (it still is) and his parents did not approve. So he kept his medicinal use a secret.

“My mother actually complimented me on the improvement in my behavior and demeanor after I started smoking cannabis,” he recalled. “She said I was a lot calmer and more pleasurable to be around. So for two years there were many pluses, and no problems. Until the law got involved.”

‘Police brought the summons to my front door’

Condon’s first of many run-ins with the police took place during a traffic stop.

Threatened with a thorough search of his vehicle, he admitted to having a small amount of hashish stored in the glove box. Police proceeded to “turn the car upside-down”—finding nothing besides the hash he’d surrendered—then “drove off leaving me to put everything back together.”

Getting busted that first time didn’t put him in serious legal jeopardy, but did prove traumatic in a more pernicious way.

“When the police brought the summons to my door, they met my parents, who didn’t like the fact that there was a marked squad car outside their house. It made them look like criminals in front of the neighbors, which created a real divide in my family.”

Cannabis remains prohibited in Ireland per the Misuse of Drugs Act, with only narrow exceptions in place for medicinal use.

There are severe penalties for cannabis cultivation and distribution in Ireland.

Penalties for possession range from relatively small fines to potential prison time for repeat offenders, with more severe penalties in place for cultivation and distribution.

In 2019, Ireland’s Health Minister signed legislation detailing the eligibility requirements for Ireland’s Medical Cannabis Access Program, which currently covers only three conditions and is only open to patients who’ve failed to respond to “conventional” treatments. Lawmakers and activists across the country are working to both expand the medical access program and end prohibition entirely.

While earning a degree in herbal science, Condon volunteered with activist organizations like Legalize Cannabis Ireland and Students for Sensible Drug Policy to help educate lawmakers and the general public. He also created Martin’s World, a podcast about cannabis law and culture in Ireland.

Meanwhile, between the ages of 17 and 21, Condon estimates the police stopped and searched him 100 times. On 12 occasions they caught him carrying a few grams of weed for personal use. The first 11 of those encounters didn’t result in a criminal conviction, but in April 2019 he got booked over 10 euros worth of cannabis.

“It’s now tough to find employment because I’ve got a conviction on my record, and because I’ve been so outspoken on this issue,” he said. “It can be very arduous and draining to be an activist. I’ve seen a lot of people get burned out by it. But for me, I could never give up after being treated that way.”

At first, Condon planned to protest his criminal conviction by smoking a joint outside the police station. But then he envisioned a better way to make the same point without getting arrested all over again.

First, he connected with a friend who just happened to have six cannabis plants handy. Then he printed up special garden tags with the hashtags #PatientsforSafeAccess—referring to Patients for Safe Access, where he served as a local director—and #BringAliciaHome, highlighting the story of fellow Irish cannabis activist Alicia Maher.

Condon first heard of Maher’s public campaign for medical cannabis access when she called into a local radio show in Cork. Following a botched operation, she had suffered through years of serious complications, as detailed on Lunchtime Live:

Alicia was taking 30 [prescription pills] a day to manage her chronic pain in the years following complications from having her tonsils removed at the age of 17. She subsequently had three operations on her throat and while in hospital, experienced bleeding on her bowel and then her large intestine burst. A bag was placed in her stomach, which was due to be removed after five years, but in the meantime, pre-cancerous cells were discovered in her rectum and she had to have it removed. She contracted MRSA while recovering and it then took two years for the wound to heal.

For years Maher lived a life of painful surgeries and procedures. Then, in 2018, she tried cannabis, and everything changed. Cannabis took away her debilitating chronic pain and helped her wean completely off opioids.

She applied to Ireland’s extremely restrictive medical cannabis program, and organized a symposium at Limerick University on the plant’s medicinal benefits. Ultimately, Maher ended up having to move to Spain so she could have safe, affordable access to cannabis.

Nearly two years later, she remains in Spain—hence the hashtag calling on the Irish government to change its laws and bring her home.

Going public in a big way

After creating the hash-tagged garden tags to highlight Maher’s story, Condon could have gone ahead and committed his acts of civil disobedience anonymously. But he chose from the beginning to put his name behind the deed.

“I did it live on Facebook, so there was no hiding. I wanted to make sure I got my statement out.”

“I did it live on Facebook, so there was no hiding,” he said. “I wanted to make sure that I got my statement out as to why I was doing it. Which is basically that these laws are doing far more harm than this plant ever could.”

He filmed himself transplanting six cannabis plants into a garden box outside a local cafe, and encouraged people to take pictures of them and share the hashtags.

Despite getting a lot of attention online, the plants remained in place for two weeks. Then the Irish Times contacted Martin for an interview. After which they called the local police for a reaction quote.

“Within a half hour of that phone call the plants were removed,” Condon recalled. “Someone sent me a photo of the police walking off with the plants. So I asked my buddy if he had more plants to donate, and he said, “Yes, I do.”

Condon planted cannabis in front of Cork City Hall and the Irish Prime Minister’s office in Dublin, “to send a direct message to the people in charge that they need to address this issue.”

He succeeded in in capturing the public’s attention and sparking a substantive national conversation around legalization and the need for expanding medical access. One national politician even came out to support a medical cannabis rally Condon organized after planting cannabis outside his office.

“I couldn’t agree with them planting the plants but I can understand sometimes you do things to raise awareness and if it raises awareness and gets it across the line maybe it’s worth it,” Senator Pat Casey told the Sunday World. “The plants weren’t there too long before they were removed by the council. Nobody was harmed in it.”

Despite a recent poll showing that only 4% of Irish people oppose the medical use of cannabis, the Irish government has been agonizingly slow to move on the issue. But an upcoming Citizen’s Assembly on the subject could help push things forward. The rising tide of public support keeps Condon optimistic as he continues to plant his guerrilla gardens.

“I’m not alone in this anymore,” he said. “I get pictures every day from people who’ve planted plants with these same hashtags near where they live. Plants are popping up all over Ireland.”