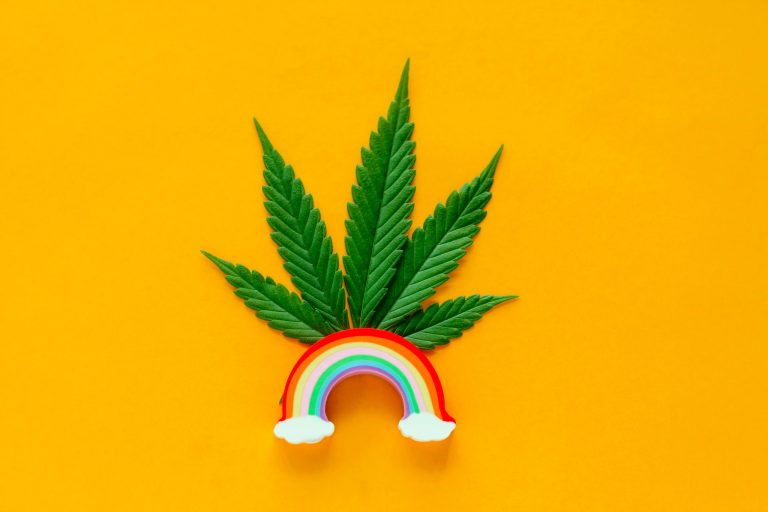 Finding a nine-foot cannabis plant growing in your backyard is surprising, to say the least. Some folks might not have seen the magic and serendipity in such a marvel. But most people aren’t Tabitha Fritz, cannabis educator and entrepreneur.

The journey from wayward seed to resilient flowering plant was an accidental blessing for Fritz. While she and her husband worked diligently to launch Fritz’s Cannabis Company, a licensed producer of gummies—a little miracle was growing in their backyard.

Out behind the back deck, under an awning, with no sun or nurturing, a tiny seed took sprout against all odds. How does such a thing even happen?

As ambitious homegrowers deal with a difficult season, losing harvests to powdery mildew, weather, or pests, a stubbed-out joint full of seeds grew into a formidable flowering female. Entirely by accident.

“I have this big planter on my deck,” says Fritz, “I would always sit there at night and have a joint. I’m lazy, I didn’t want to get up to throw it away, so I just started stubbing them out in this planter thinking they would just degrade in the soil.”

The planter/ashtray sat out on her deck all winter, and come spring, it was so gross that Fritz threw the soil behind her deck. That should have been the end of it, but lady Jane had another plan, and a life lesson, about resiliency and keeping an open heart—even in the difficult moments.

The little cultivar that could

At first, there was a tiny sprout. “I thought it was a wild hemp plant growing there on the ground. And was like, ‘oh cool, what are those little wild guys’,” explains Fritz. “The next time I checked it was three feet tall! Those are some hearty seeds right? To survive the winter and just start growing—this plant must be magical.”

Now, the plant is over nine feet tall with a stalk so thick Fritz can’t even get her hand around it. In order to find sunlight in such a secluded area, the plant shot up quickly. As a result, the buds are really dense and concentrated at the top of the plant. The top colas are gigantic, over a foot and a half estimates Fritz.

“The buds are thick, huge, and sticky,” says Fritz. “If you come within an inch of proximity to it, your hands are covered. The sugar leaves are absolutely coated in trichomes. It’s so sticky, I could make finger hash!”

The exact strain will remain a mystery—can you remember all the kinds of weed you smoked last year?

Fritz says the plant has very sativa-like traits. The giant fan leaves are twice the size of her hand and are long and skinny. She estimates the buds are high in limonene, caryophyllene, and terpinolene based on the strong citrus and pepper scents enveloping her backyard.

Starting a business during a pandemic

“I think, I, like everyone else in the world right now, am finding life to be a challenge,” says Fritz. “Around the time this plant started growing, my husband and I were trying to get our business off the ground.”

The process of launching Fritz Cannabis was more time-consuming and expensive than the couple thought. While their gummies are soaring off the shelves now, at the time, Fritz found it hard to keep her connection to cannabis.

“I lost my connection during the process of taking this business from the legacy market to legal. As someone who believes that the magic in the universe is truly all around us, it was a really terrible feeling to lose that connection.”

This accidental plant was more than just a happy mistake to Fritz, it was a metaphor and a message. She convinced herself that the plant wouldn’t end up being female because there was no way she would be that lucky.

“Ari said, ‘I have a feeling it’s a female plant and that’s going to be a sign that everything’s going to be alright.’ To have a partner say that to you when they see you struggling? That was very meaningful to me,” says Fritz.

But she still didn’t believe it.

Right around the time they discovered the plant to be female, the ball started to roll with their business as well. Their gummies sold out on the Ontario Cannabis Store, and they were receiving great reviews from customers. Fritz took this as a sign that beautiful and resilient things can grow in difficult conditions.

“I think that this experience allowed me to reconnect with the cannabis plant,” shared Fritz. “And to remember the magic that she has already brought into my life. I think this experience was a gift from the plant to say, ‘Here, remember who you are.’”

Bring back the joy of sharing weed

“It was a magical experience to be a part of. This plant took hold where it wasn’t supposed to grow. Nobody expected it to grow. By all logic, it shouldn’t have been possible.”

Instead of simply enjoying the effortless weed, Fritz found a meaningful life lesson in the robust, hearty plant. As she prepares for harvest, Fritz is hoping to share this dank miracle with her friends. She intends to keep and cure the top colas, and turn the rest of the plant into hash.

It is a hard time to share, the famous “puff puff pass” has been largely on hold thanks to Covid. Fritz is going to seize this opportunity to “bring back the joy of sharing weed.”

“I can’t wait to share it with friends. That’s one of the other things that I love so much about weed, you share it with people. We can’t fix everything in the world right now, but I can certainly give people some of that this magic that grew in my backyard.”

Ashley Keenan is the Canada editor at Leafly, as well as a freelance journalist, consultant, and patient advocate in the cannabis industry. Follow her on Twitter and Instagram @askcannaqueen for hot takes on cannabis and chronic illness.