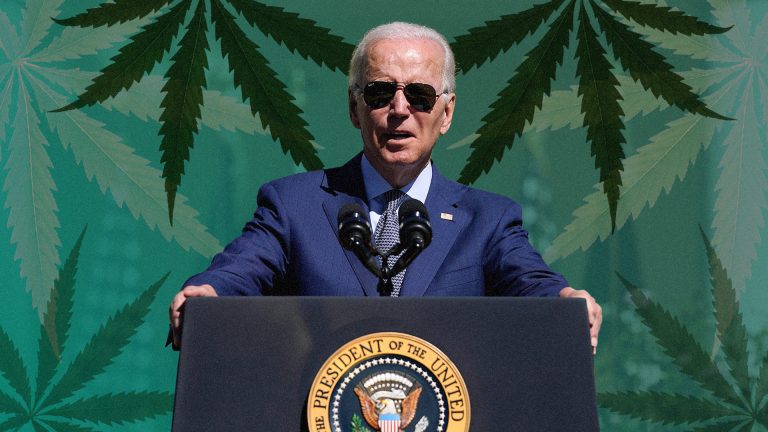 In an announcement that took the world by surprise, President Biden this afternoon declared that he would pardon all federal prisoners who are currently locked up for simple marijuana possession offenses.

To quote Biden on a previous occasion: This is a big fucking deal.

“There are thousands of people who were previously convicted of simple possession who may be denied employment, housing, or educational opportunities as a result,” Biden wrote. “My pardon will remove this burden.”

Biden also announced that he has directed US Health and Human Services Secretary Xavier Becerra to start the process of rescheduling marijuana under federal law.

“We classify marijuana at the same level as heroin—and more serious than fentanyl,” Biden wrote. “It makes no sense.”

Biden’s announcement marks one of the most sweeping actions ever taken by a president regarding cannabis.

The move does not, of course, immediately legalize marijuana. Biden’s move only starts a process that could result in the reclassification or removal of cannabis from the federal drug schedule.

Ninety minutes after making the announcement, the White House tweeted out this photo of Biden signing the executive order pardoning the prisoners.

How big a deal is this, really?

Joe Biden just did what Bernie Sanders proposed back in 2020.

Though it doesn’t legalize weed, today’s announcement is shocking in its scope.

To get a proper sense, consider that Leafly’s former news editor, Ben Adlin, wrote an article a little more than two years ago headlined Bernie Sanders says he’d legalize cannabis by executive order. Can he do that?

This afternoon, Joe Biden did what Bernie Sanders proposed back in 2020.

For the past two years the cannabis world has been waiting on President Biden to do something, anything, to push progress forward. Just three months ago a group of five Democratic (and one Independent) senators sent a letter to Biden, Attorney General Merrick Garland, and HHS Secretary Becerra, demanding that they take action—finally, and posthaste—on cannabis reform.

Publicly, the White House responded with nothing but crickets.

Internally, however, it now seems the administration did actually have a game plan. The Biden team’s timing, one month before the midterm elections, is likely to energize the Democratic base—and could impress quite a few independents and Republicans, too. Although Democrats tend to favor full legalization to a greater extent than Republicans, cannabis reform has many advocates within the GOP.

Leafly’s Max Savage Levenson captured the mood among many:

During the 2020 campaign, Biden pledged to do the bare minimum in terms of cannabis reform. Candidate Biden wanted to “decriminalize” cannabis, which would leave us with a nation of legal consumers and criminalized growers and sellers.

As Biden waffles on weed reform, Dems press him to do, like, any-f’ing-thing

How marijuana could be legalized federally

Leafly’s Ben Adlin laid out the process of federal legalization back in 2020. “There are two general paths to legalizing cannabis under federal law,” he wrote. “Either Congress can pass a bill and the president can sign it into law, or the executive branch can deschedule cannabis administratively.”

The first path, via Congress, is by far the simpler method. Federal lawmakers pass a bill that says, essentially: “All that stuff we said about cannabis being illegal? That’s gone. Here’s what we’ll do instead.”

What President Biden has just done is launch a process to legalize cannabis under US law. It will not usher in legalization immediately—and may not legalize marijuana at all.

Perhaps the best discussion of legalization via the administrative route was written by John Hudak and Grace Wallack of the Brookings Institution, in their 2015 paper, How to reschedule marijuana, and why it’s unlikely anytime soon.

As Hudak and Wallack noted, legalizing cannabis federally through the administrative path would require rescheduling (or descheduling) cannabis and THC under the federal Controlled Substances Act. What does that look like?

Here’s the full Brookings answer to whether a president could legalize through executive order:

In a nutshell, administrative rescheduling begins when an actor—the Secretary of Health and Human Services or an outside interested party—files a petition with the Attorney General or he initiates the process himself. The Attorney General forwards the request to the HHS Secretary asking for a scientific and medical evaluation and recommendation, as specified by 23 USC 811(b-c). HHS, via the Food and Drug Administration conducts an assessment and returns a recommendation to the Attorney General “in a timely manner.” The Attorney General, often through the Drug Enforcement Administration, conducts its own concurrent and independent review of the evidence in order to determine whether a drug should be scheduled, rescheduled, or removed from control entirely—depending on the initial request in the petition.

If the Attorney General finds sufficient evidence that a change in scheduling is warranted he then initiates the first stages of a standard rulemaking process, consistent with the Administrative Procedures Act. During rulemaking and consistent with Executive Order 12866, if the White House—through the Office of Management and Budget’s Office of information and Regulatory Affairs—determines the rule to be “significant,” it will conduct a regulatory review of the proposed rule—a very likely outcome given the criteria in the EO.

What this means is that federal legalization under Biden’s new order is neither immediate nor guaranteed. There’s a long, bureaucratic process ahead of us.

Leafly will continue to update this story throughout the day.

Calvin Stovall is Leafly’s East Coast Editor. He writes and produces media in Atlanta, GA and runs day-to-day operations for The Artistic Unified Exchange, a nonprofit that protects intellectual property on behalf of independent artists and underserved communities.