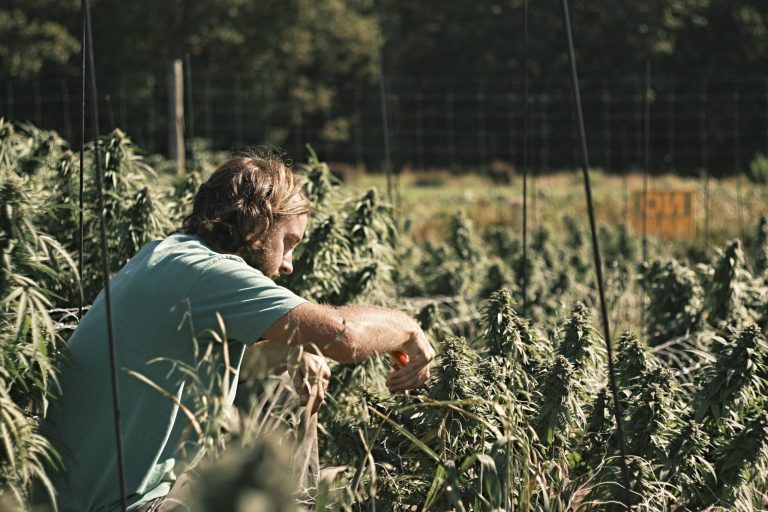 ANNAPOLIS VALLEY, NS, CANADA—Adam Webster walks through his growing field, trimming shears in hand. He points to a few plants with bent stalks, held upright by trellises and sticks, damaged by the hurricanes and tropical storms that blow through the Maritimes every September.

“The rain was enough to topple a lot of plants, but we just pop them back up,” says the owner of Annapolis Valley Craft Cannabis, a small micro producer outside of Wolfville. “But they didn’t snap.”

Like other historically fertile regions in Canada—the Okanagan, Niagara, or Canada’s ‘cannabis belt’ in southwestern Ontario—the Annapolis Valley is warming to cannabis agriculture.

Lee McMahon had spent seven years living and working in the Kootenays learning the tricks of the growing trade before moving back to his family’s farm just outside of Kingsport, NS. There he launched Tidal Leaf Farms, a greenhouse micro-producer that received its licence in June 2020.

To him, the prospect of sustainable growing in his home was enticing.

“Lots of people have [told me] don’t get into outdoor, just try to get into indoor,” he says. “But we’re supposed to be, as a nation, moving towards sustainable stuff. Growing weed indoors is not sustainable.”

That has not been without its challenges though.

“The temperature, the weather, the hurricanes—it makes it really hard to [grow] outdoors,” he says. Unlike Webster, McMahon grows inside a covered greenhouse that can be rolled open to let the wind blow in.

More often you learn through experience. McMahon recently had to harvest his crop of White Widow, tall plants that were left looking “really sad” after Hurricane Ida blew through in early September.

“The biggest thing is going to be finding the right cultivar for around here.”

For a region as windy and wet as the Valley, that means hearty plants: short, bushy indicas that can withstand the high Bay of Fundy winds in the fall, and quick-flowering sativas that finish flowering before the temperatures drop.

“The Annapolis Valley is probably one of the best places growing regions in Canada, I would say. We’re in [soil] Zone 6, which is comparable to southern Ontario or BC.” says Webster. “This used to be a big tobacco growing area at one point; cannabis is pretty similar.”

Wind and rain aside, Webster says there’s lots going for the region as a cannabis heartland.

“We have good heat here, especially on this [south-facing] farm,” he says. “We’ve also got sandier soil, which is well-draining,” and which provides some balance against the wet weather. “[Plants] like a lot of water, but not sitting near the roots.”

Good sun and soil aren’t all that’s needed for micros to get their footing in the cannabis industry. Micro-producers like Webster are finding it difficult to get their cannabis to market.

The high cost of sales licences for micro-cultivators means that growers like McMahon and Webster often need to go through bigger buyers first.

Cultivars and crop size seem to be the biggest hurdles outside of licensing costs. He explains that providers like the Nova Scotia Liquor Corporation (NSLC) are interested in local product, as long as it’s single strain, consistent, and in large supply.

For micros, it can be difficult to reach that scale for an individual cultivar without partners.

Most of Webster’s craft flower is destined to be processed into oil and sold wholesale. “We have to sell through these bigger producers, who are already struggling, it’s like it was designed for us not to succeed.”

But Webster feels hope when he looks at how other craft cultivators are teaming up to meet the necessary scale. He looks to the Kootenays, where Rosebud Cannabis Farms has found a potential solution.

The producer brought seven micro-growers together to grow a single cultivar, which Rosebud then gets into provincial markets. Some day, Webster would like to see this kind of initiative come out to the east coast.

For now, all McMahon and Webster can do is finish this year’s harvest and start planning for next year. They hope that by the time planting season comes around that some of the business questions will be answered.

If nothing else, Webster will hold onto his belief in the product. “Outdoor field tomatoes always taste better than a greenhouse,” Webster says. For him, it’s the same with cannabis.

“This,” he says, as he carefully trims the fan leaves away from the bud, “has all the flavour of the soil, and everything that grows into it. Hydroponic, it’s just surreal—I don’t think they can ever mimic that.”

Share. Facebook Twitter Pinterest LinkedIn Tumblr Email
Previous ArticleThe Hard Lives of Britain's Synthetic Marijuana Addicts
Next Article The winner of the Best Cannabis Company in New England is on In The Weeds with Jimmy Young!