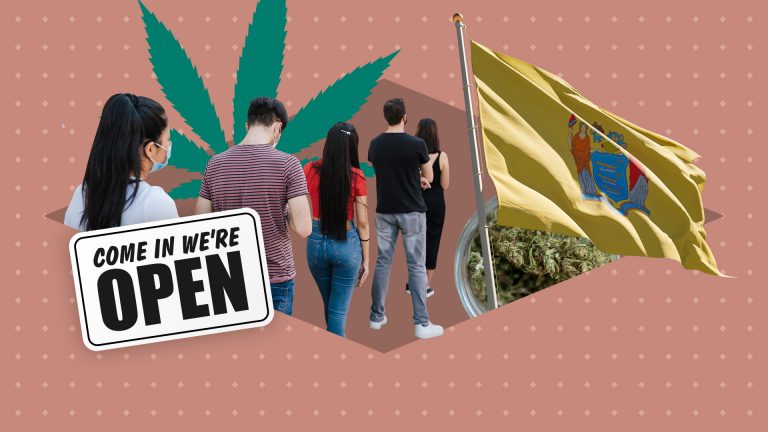 Opening day is here: On Thursday, April 21, New Jersey marijuana stores started selling to all adults 21 and older, marking the end of prohibition and the start of a new legal era.

Leafly editors Calvin Stovall and Bruce Barcott are in NJ for the big event. They’ll team up with contributing writers sending in reports from stores up and down the state.

In some states, the opening of adult-use cannabis stores is a day when the governor shies away from cameras. Not so in New Jersey, where full legalization was a big part of Gov. Phil Murphy’s campaign promise and eventual legislative success.

“It’s a big day for New Jersey,” Murphy declared just a few minutes before the doors opened at the Zen Leaf location in Elizabeth, NJ.

Murphy was joined by a host of state leaders, including state Sen. President Nick Scutari, a longtime advocate for legalization and the main force behind its passage in New Jersey.

9 a.m. in Elizabeth: Waiting for the doors and the governor

A line of customers stretched down the sidewalk outside the Zen Leaf store in Elizabeth, NJ, this morning, waiting for the 10 a.m. opening—and for the governor.

First in line is Daniel Rivera, who arrived around 8:15 this morning. He’s hoping to buy some qualify flower.

New Jersey Gov. Phil Murphy pulled up to the store around 9:35 a.m., greeted the voters, and then went inside to get an executive preview.

Murphy and state Sen. President Scutari addressed NJ buyers outside of the store after delivering on their long-anticipated promise to bring legal weed to The Garden State.

The reporting crew at NorthJersey.com gave proper credit to 23-year-old Daniel Garcia of Union City, who showed up at the RISE store in Paterson sometime around 3:30 this morning.

The parking lot was empty.

“I thought maybe I got here too early,” Garcia told the news site.

Not to worry: By the time 6 a.m. rolled around, a few dozen others were waiting behind Garcia, enjoying live music and free donuts provided by the RISE staff.

First in line at the RISE store in Bloomfield, NJ was Melissa Correa, 42, who came from Plainfield. She stepped into the store at 6:00 a.m. sharp this morning and completed the first purchase by about 6:05 a.m.

RISE officials would not confirm which of their locations rang in the state’s first sale, so Correa and Garcia will have to share the historic title of NJ’s first legal bud buyer for now.

Melissa Correa did not wake up this morning planning to be the first adult to buy legal weed in NJ, but the lifelong toker was happy to make history this morning as RISE dispensary in Bloomfield welcomed NJ’s first rush of recreational buyers.

“It’s a historic day here in New Jersey,” Correa told Leafly just minutes before entering the doors of RISE’s Bloomfield dispensary. “I have been trying to imagine this day for 25 years, at least,” said Correa. “I’m 42 years old, and the first time I took a toke was when I was 13.”

“In my adolescence and younger adult years there were some legal troubles,” Correa explains. “So it’s gonna be a good feeling to walk out of here and know that’s all behind me and it’s all gonna be behind everybody else.”

Just moments away from making one of her state’s first legal marijuana purchase, it still felt like a dream. “It won’t feel real until I walk out those doors,” she added.

Time to RISE and shine

Correa led an eager crowd of consumers who beat the sun to RISE’s Bloomfield dispensary in the early hours of April 21. She and other early birds got the state’s first rec weed, thanks to Green Thumb Industries (GTI) CEO and Chairman Ben Kovler.

“I’m an early morning guy, (so) we’re open at six,” Kovler told Leafly just after opening. “There’s hundreds of people in line, people want the product, so we’re happy to give it to ’em legally and on time.”

GTI’s RISE team has been serving medical patients across NJ since opening in Paterson in 2019. The company is one of a handful of vertically-integrated medical operators approved by the state to open doors to all adults this month. They are filling the demand for adult sales while the cannabis board reviews new rec license apps from smaller businesses.

RISE’s day-one shoppers were greeted by an intake team before being led through a queue of touchscreen ordering menus.

Keith Perez is chief supervisor of RISE’s nearby Paramus location, which didn’t open for rec day one. Perez and his colleagues were on hand for their sister store’s big day to help walk first timers through the ordering process.

A warning at the top of each ordering screen reads, “Adult use purchase limits for 4/21 per customer: 2 eighths (3.5 grams) of flower, 2 vapes, and one quarter ounce (seven grams) each (customer).”

There’s also a limited supply of strains for day one shoppers as licensed suppliers catch up to the new law. “Right now, we have Animal Face, Bananas and Cream, OG Kush Breath, and Rebel Sour, which is one of our new strains,” Perez said. ”But the (Rebel Sour) is only popcorn buds (smalls, or shake) at this point.”

The final step of the process is a checkout counter that is exclusive for adult-use buyers. At RISE and other ATCs across the state, medical visitors are given priority check-out access in a separate section at the front of the store. And if medical supply ever dips below demand, dispensaries are required to take from rec products to satisfy medical needs. They are also forbidden from doing the opposite: Serving rec demand with medical supply.

Kovler’s GTI company operates the RISE stores in Bloomfield and Paterson, as well as the dispensary in Paramus that is not yet approved for adult-use. He marked the big day for his dispos, and the entire industry, with a smile: “It’s a huge event,” Kovler told the Associated Press. “It’s a moment in time when prohibition 2.0 is lifted.”

The GTI CEO told Leafly that he was not concerned about the long lines interrupting patient access on opening day, or any day in the foreseeable future. “It was 420 yesterday, no medical (patient) is coming at 6 a.m,” Kovler said.

The RISE facility has two separate waiting areas and check-out counters for medical and rec buyers. Per CRC guidelines, medical patients will always get first dibs on supply. “It’s a real detailed program from the state,” Kovler said of the CRCs plan for protecting medical access and social equity in ways other legal states haven’t successfully implemented. When asked if he’s happy with how the state’s handled the process thus far, Kovler points out: “It’s always a learning experience, but everybody’s in it together.”

“The computer’s frozen, the state system had to reset,” said Kovler with a shrug and a laugh just moments after opening the doors: “Keeps things fun,” he quips before moving on to the donut truck in the parking lot.

The computer hiccup happened just as the first patients were trying to check out, but Kovler kept things cool, even while dozens of TV news cameras and reporters swarmed his facility.

He feels that years of serving medical patients prepared RISE and other day-one dispensaries for the new flood of rec buyers that will be coming from neighboring towns and states. Regulators predicted NJ’s legal supply was about 100,000 pounds short of projected demand last month. But the CRC saw enough in recent weeks to approve GTI and 6 other alternative treatment centers (ATCs) to expand to serve the rec market at existing medical locations.

While the opening day lines, computer bugs, and strict CRC guidelines are welcomed challenges, Kovler admits that witnessing the plant’s destigmatization is the one thing that can be “overwhelming” at times.

A statement from NORML on NJ’s opening day

Despite the current limit on open stores, cannabis advocates statewide are happy about the progress of The Garden State’s adult-use market. Just over a year ago, Gov. Phil Murphy signed legal cannabis into state law.

“However limited, any start to sales marks a notable milestone, one that warrants greater reflection on the long-term goals we want to achieve,” said Michael Chazukow, Executive Director of NORML New Jersey. But there is still a lot of work to do if NJ wants to raise the bar for how the entire industry handles social equity.

No telling NJ buyers can expect to bump into Colbert at the RISE or Ascend locations down the street. But based on his monologue, Colbert and his writers had access to premium NJ gas long before rec sales opened today.

Other NJ weed influencers that deserve their due include Redman and the Fugees. Red recently dropped a special 420 video for “JANE” the day before Dirty Jerz went legal. “Everybody loves smoking that Jane!” shouts the Funk Doc in celebration of this historic moment.

More dispensaries will start to welcome first-time buyers through early May. Stay tuned for the latest from New Jersey’s budding legal market throughout week one of adult-use cannabis in The Garden State.

Leafly has partnered with Last Prisoner Project and other advocates to continue undoing the harm done by the criminalization of cannabis. LPP estimates that 40,000 American are currently incarcerated for non-violent cannabis crimes.