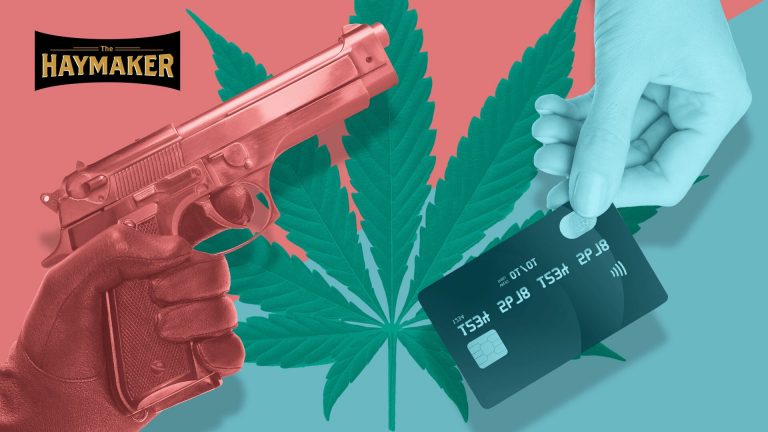 Last Friday, Leafly published Amara Barnes’ startling account of an armed robbery at her cannabis store. Barnes is a staff member at a store in the Tacoma, Washington, region. Armed robbers hit her store—for the second time—on March 15. Two other nearby cannabis stores were also robbed the same day. In the past two months, more than 70 armed robberies have occurred at cannabis stores in Washington state.

“Where is the outrage?” Barnes asked. “When and where will the next bullet land?”

One day later, the next bullet landed in the body of Jordan Brown. Brown, a staff member at the World of Weed store in Tacoma, was shot and killed by an armed assailant during a robbery on Saturday night, March 19.

Friends, family, and co-workers created a moving tribute to Brown at the temporarily closed store in the past few days.

If I could snap my fingers and teleport those flowers, pictures, and “Remember His Name” placard, I would place them at the office door of Sen. Cory Booker (D-NJ) in the Hart Senate Office Building.

Consider his name, Sen. Booker. And consider changing your opposition to the SAFE Banking Act, which would allow legal cannabis companies to work with banks and stop acting as cash-only businesses.

I was with you in your strategic position on SAFE Banking, Sen. Booker—until this week. With Jordan Brown’s murder, things have changed. This bill is no longer the SAFE Banking Act. It is now the Safe Worker Act.

My store was robbed on Tuesday. We’re still recovering from the trauma

Booker’s leadership has been critical

Let me pay full respect to Cory Booker. The New Jersey senator has courageously led the charge for equitable cannabis legalization in Congress and at the national level. He is—and has been—bold, outspoken, unapologetic, and absolutely steadfast. His Marijuana Justice Act, introduced back in 2017, set the terms for today’s equitable legalization debate.

Sen. Cory Booker is a proven advocate for workers and legalization. The clock is ticking. Now is the time to act, Senator.

Last year Booker teamed up with Sen. Chuck Schumer (D-NY), the Senate majority leader, to introduce the Cannabis Administration and Opportunity Act, which would legalize cannabis nationwide and fund programs to promote equity and fairness in the industry.

At the time, Booker famously pledged to block the SAFE Banking Act (aka the Secure and Fair Enforcement Banking Act) from passing prior to full legalization.

“I’m telling you right now, if somebody tries in the Senate to do just a banking bill,” Booker said, he pledged to “lay myself down” to block it. America deserved a full cannabis legalization act, one that both ended prohibition and repaired the harm of the War on Drugs. (To be clear: Federal legalization would allow banks to serve cannabis companies, just like the SAFE Act.)

But months have passed. The House is poised to pass full legalization next week—for a second time—with the MORE Act, its version of the Schumer-Booker bill. Meanwhile, the Senate majority leader’s own legalization bill has gone nowhere. The clock is ticking. Come November, Booker’s party may lose control of one or both houses of Congress.

It is time to move.

Booker’s reasoning made sense to me last year. SAFE Banking seemed like a measure designed to help the comfortable, not the afflicted. I was also mindful of the legislative realities in play. Sometimes you only get one bite at the apple, and I was wary of the possibility that SAFE Banking’s passage could make some Congress members less likely to vote for full legalization.

The murder of Jordan Brown changed my mind.

Brown’s death, along with Amara Barnes’ article, brought home to me the binding connection between banking access and worker safety. Access to banking isn’t about making life easier for the executives at big multi-state cannabis companies. It’s about protecting the right of American cannabis workers to a safe work environment.

Every other store takes debit or credit. Cannabis can’t

Here’s how the dots connect.

Under current law, banks that open accounts for cannabis companies run the risk of breaking federal anti-money laundering statutes—because cannabis remains an illegal drug under federal law. When a legal, state-licensed cannabis store can’t set up a basic savings or checking account, customers can’t use debit cards, credit cards, Apple pay, Venmo, or any form of payment other than cash.

The pandemic changed the world of cash

Add this fuel to the fire: During the past two years of the pandemic, many non-cannabis stores stopped accepting cash altogether. This was done for worker safety reasons (eliminating hundreds of touch points for virus transfer), but after a while many customers adapted and began paying with plastic out of habit. I used to hit up an ATM once every week or so. Nowadays I stop by once every month or two. I’m not alone in this shift. One financial analyst noted last year that the pandemic had “turbocharged the switch to digital.”

That means cannabis stores are now among the few brick-and-mortar retailers with significant amounts of cash on hand. As Amara Barnes wrote last week: When you can’t use a bank, you become a bank. For those inclined to crime, cannabis stores now offer all the temptation of a bank without any of the safeguards in place to protect bank workers. To put it bluntly: The FBI ain’t coming after you if you stick up a weed shop.

Remove the cash = remove the target

The current wave of armed robberies we’re seeing in Seattle—and last year in Portland and Oakland—will not stop here. It will spread to other legal states. Store owners are scrambling to protect themselves, their staff, and their customers. Armed guards are now a common sight. I passed two of them standing outside one of my local shops earlier today. The sight was both reassuring and unnerving. We shouldn’t have to live like this.

Get the cash out of the stores. That’s the key to the whole thing. To make that happen, cannabis stores must be able to accept non-cash forms of payment. And to make that happen, Congress must pass either federal legalization or the SAFE Banking Act. Immediately.

Sen. Booker, new information has entered our world. The environment has changed. My position on the SAFE Banking Act changed accordingly. Yours should too.

More Haymakers for your mind