Me vs. The Weed: Coming back from a tolerance break 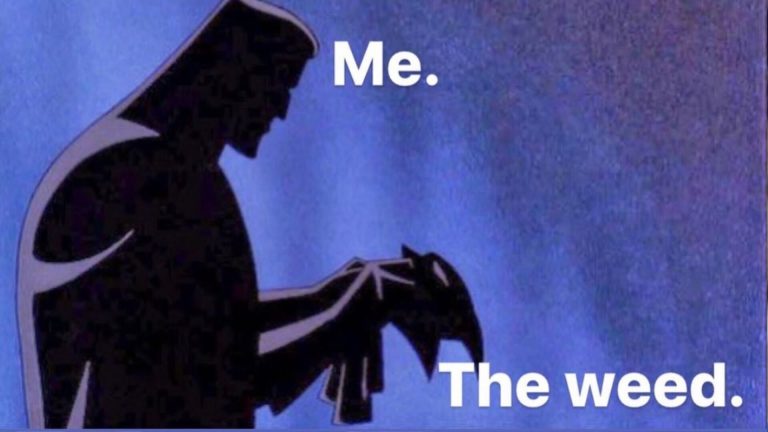 Artist Thelonious Martin shares the highs and lows of returning from a ‘T-break’ with Leafly.

Taking a break from cannabis is a common and healthy practice among even the most seasoned users. The benefits of a tolerance break (T-break), include fresh perspectives, new room for growth, and rejuvenating effects when you come back from your break.

Whether you’re returning to the plant from a New Year’s resolution, or simply want to know more about how your body may adjust to tolerance breaks before taking one, there’s no need to fear.

Temporary loss of appetite, mild insomnia, irritability, and vivid dreams are the very worst ‘withdrawal’ symptoms to expect. But more research needs to be done before we can fully understand how our bodies react to sudden increases and decreases in consumption.

For years, musician Thelonious Martin has entertained fans and followers with his “Me vs. The Weed” series of memes. Since 2018, Martin has documented his love for the plant with hilarious photos that depict his varying degrees of highness throughout the day.

But in early 2022, the Chicago resident decided to step away from the weed for a month or so for multiple reasons.

In his own words, Thelonious shares with Leafly what happened when he took a T-break after years of maintaining a daily high. Keep reading to see what mental and physical effects Thelonious noticed, as well as the feelings he experienced during his first week back on the bud.

Why I decided to take a tolerance break

I guess it could be considered a New Year’s resolution. I had smoked through like two pounds of weed over the course of like a few months. And I was thinking to myself after smoking essentially every day, ‘I should probably give myself some type of break.’

And seeing where I was at creatively, on a healthy weed habit versus completely sober, I wanted to try it. It’s not like I was smoking some unhealthy amount. I wasn’t smoking, you know, an ounce to the face the day. But I was still very consistently high throughout the day.

I wanted to see what it was like to be completely sober.

I don’t think I’ve been completely sober since around when I got out of college. And creative wise it was kind of a reset. I even just shaved my beard down low.

My baseline before the break was probably like two or three (joints) a day. Like one on the wake up, one before I ate, and one falling asleep. So I just wanted to hit a reset.

How stopping cannabis use affected my dreams

I’ve been having the most vivid dreams over the past month and a half, all off not smoking weed heavily. I legit went five or six weeks without smoking.

I stopped smoking cold turkey, and I didn’t have crazy withdrawal from it. But oh my God.

When I stopped smoking cannabis, I was having two or three dreams a night. And I would remember like one or two of them vividly.

I watched Euphoria before I went to sleep last night, and my dream looked like it was shot on old Kodak film, it was wild. That’s been like the one major thing I noticed that I’ve been fucking with. Because I’ve been trying to draw inspiration from said dreams.

It’s been cool having very vivid dreams. And when I meditate, sometimes song ideas come to me really clearly. Just the clear-mindedness of the T-break—It’s been pretty tight. But I do miss being able to instantly cure any kinda anxiety or panic attacks with a few inhales.

In that past, I might have just been able to roll up and rise above any anxiety. But now I gotta work through it.

With no weed, no meditation, no nothing, you’re just out here rolling the dice. No protection. If something goes bad, you don’t have anything to help yourself.

How my tolerance break affected my creative process

Smoking can make creating music easier, because you can reach a deeper consciousness. I guess you’re more relaxed and you’re able to kinda like venture into a dream state a little bit more.

On my T-break, I did have trouble falling asleep. I had to scroll through Instagram or TikTok for like 20, 30 minutes until my eyes got heavy. On weed, it’s easier to fall asleep. But it was also very difficult to remember my dreams.

So on those late nights, the T-break has been difficult, but I feel like it’s more rewarding. Because I’ve been having very vivid dreams, visuals, and ideas that I can just attack when I wake up the next day.

My first session back was comforting

It wasn’t as psychedelic as the Black Panther smoking the heart-shaped herb, but it was comforting. It was a bonding thing. Cause I don’t think people realize the bond that cannabis can create. You got your consumption rituals, you got the music you play.

So sharing that kind of energy with my mom and my dad is great. I work in music. They were always thinking it was a matter of time before he quits this straight edge act and does some drugs!

Easing my way back into regular consumption

I’m like a good hitter come back from the injured reserve. They got me in DH right now taking small at-bats. Working my way back up so I can be back on the field.

I smoked a little bit with my pop yesterday. I smoke with both my parents. In high school, I was sober Sally. I was a kid that was like, ‘No I don’t wanna smoke weed. I wanna make beats!’

Obviously things have changed. But my parents are younger than most. My dad just turned 50 this year. They both smoked weed all my life, I just didn’t know.

I didn’t smoke when I was a teenager. So I didn’t know what to look for, what it would smell like, anything. I would just see them with a funny face on, hungry. It didn’t really click to me until I saw stoner comedies and things of that nature.

But now I get to smoke with them and embark on all types of fun adventures. And it’s raw as hell.

So those times with my parents have been the times I’ve smoked after my T-break. No better way to get off a T-break than smoking the double joints with your mom and dad.

I have always had a healthy relationship with flower. If I felt a little anxious, or I needed a good start to the morning, it worked to calm me down. If I had a lot of business calls, I’ll roll one up.

If I wanted to make sure I was actually hungry before a meal and I really enjoyed the food I just cooked, then I smoked. It was really very action-based or medicinal situations. It wasn’t a habit.

It was the end of the holiday season when I started the break. There was a bunch of stuff going on and just being a responsible adult kept me busy and away from boring moments that might have led to smoking again. I also think my new project STATIC VOL. 5 allowed me to maintain focus and not get back into it.

I was gonna break it like four weeks in. I hit my plug one day, and she didn’t hit me back. And that kind of helped me go an extra week or two. I was like ‘fuck it, wasn’t meant to be.’ And I went right back to being very sober and chilling and crib.

I feel like when it’s more based in habit, it’s a little harder to do a T-break. Your arms might be shaking in the morning. It’s like food, any substance, can become a habit. Like, I love milkshakes. I don’t know if I can do a month without milkshakes. I might punch somebody in the face on the 25th day.

Final pros and cons of a ‘T-Break’

Now that I’m done with my T-break, I like my new tolerance as low as it is. On the car ride yesterday with my pops, I took like four hits. And I was like, ‘I’m good, I’m chilling.’

I had achieved a nice buzz that I was gonna have when I got home and played “Call of Duty.” I didn’t want to be smacked and like run into a wall or something.

I think the pros of taking a T-break are obviously that you save a little bit of money. You don’t realize how much you spend on weed until you stop buying weed. Oh, there’s $85 in my account because I didn’t buy that seven bag!

Cons are obviously not enjoying the sweet flower that is cannabis. You definitely will have to raw dog reality and cope through a lot of anxiety and panic attacks.

But on the other side of that, you can be more in control of the situation and understand more about yourself and the plant in the future when you consume. It helps you build a healthier relationship with flower moving forward.

Follow Thelonious Martin’s Me vs. The Weed series on Twitter and check out his new project STATIC VOL. 5 here.