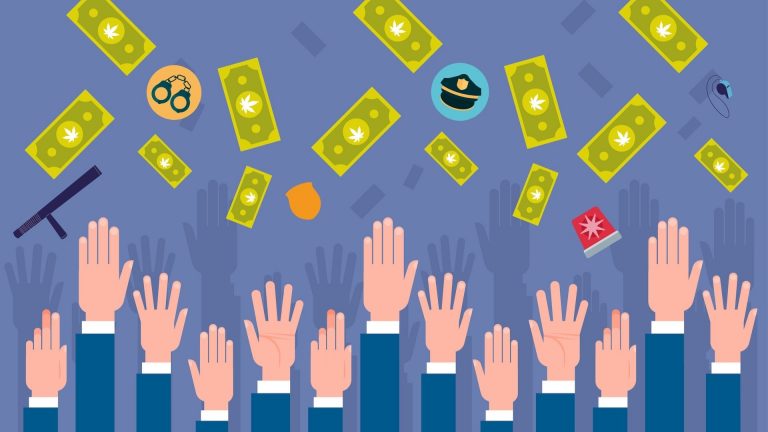 The news this week that a small Massachusetts town is charging more than $1.3 million in “impact fees” to the three cannabis companies operating within its city limits has reopened the debate over the true impact of cannabis businesses on local communities.

In a recently filed lawsuit, the cannabis retailer Stem revealed that the city of Haverhill, Massachusetts, is charging its three cannabis businesses a total of $1.3 million in annual impact fees—and $866,930 of that total is earmarked for the town’s police department.

The state cannabis board chair says he “doesn’t buy” the need for exorbitant impact fees.

Those impact fees are being charged despite the fact that myths about cannabis businesses boosting crime have been debunked time and time again. In fact, there’s evidence that cannabis legalization can actually improve local crime clearance rates.

Even as they operate as positive law-abiding forces in their communities, cannabis companies still have to combat the negative stereotypes perpetuated by America’s War on Drugs.

Without any evidence of negative community impact, we’re left to wonder why some towns and cities are allowed to charge cannabis businesses for additional policing.

Massachusetts’ legalization law allows local communities to charge impact fees that are “reasonably related to the costs imposed upon the municipality by the operation of the marijuana establishment.”

Unlike most other legal states, Massachusetts law forces cannabis companies to sign Host Community Agreements (HCAs) with the town in which they operate. This gives local communities enormous leverage over cannabis companies—which encourages them to tax the daylights out of the local weed stores.

Many Bay State towns use HCAs to create their own mitigation fees based on how they imagine cannabis businesses will impact their townships.

The law was put in place in 2018, when there was little data about the impact of cannabis companies on rates of local substance abuse, intoxicated driving, and crime.

Since then, numerous studies have shown that the community impact of legal cannabis companies is negligible. In fact, it’s often positive. Take Northampton, Massachusetts, for example.

In Jan. 2021, Northampton stopped collecting the marijuana mitigation fees to which the city was entitled by state law. Northampton Mayor David Narkewicz explained:

Northampton continues to collect a local 3% excise tax that goes into the city’s general fund, and reserves the right to start collecting mitigation fees again if necessary. But for now, the town finds no negative impact and hence no need for the tax.

Even Steven Hoffman, chairman of the Massachusetts Cannabis Control Commission, has grown skeptical of the impact fees being charged to legal cannabis stores. “Things like training police on DUI and drug education [have] been going on for a long time and have nothing to do with the introduction of a legal business replacing an illegal business,” he told the North Andover Eagle-Tribune earlier this week. “A lot of the incremental expenses cities and towns are saying they are incurring—I just don’t buy.”

Specifics of the Haverhill police expenses

I got a copy of the full list. Cruisers. Police “gear.” DARE Program.
These are things that the city is DIRECTLY CHARGING dispensaries for, ON TOP OF the 17% in state and 3% in local taxes. This sort of thing is going on all over MA. How are small businesses supposed to compete?? https://t.co/9lETS4TiQF pic.twitter.com/LrO0mHu5rL

A grand total of $884,330.83, or 60.2% of the Haverhill cannabis mitigation revenue, are headed from cannabis businesses straight to the police to help them police cannabis consumers—who are doing nothing more than following the law, purchasing legal cannabis, and enjoying it as they please.

In a country where the police are twice as likely to use force against people of color, more likely to repeatedly arrest people with substance use disorders and mental health needs, and more likely to use a low-level offense like cannabis possession to usher people into the prison pipeline, there’s absolutely no call to focus police resources on legal cannabis stores, and then tax those store owners for unneeded policing.

Not all of the impact revenue goes to the police. Haverhill gives some of it to its public schools (25% of the amount going to the police), and some (less than $30,000) to the town’s public health program.

When will hard-working local business owners stop being treated like public nuisances?

But in a country where the police are twice as likely to use force against people of color, more likely to repeatedly arrest people with substance use disorders and mental health needs, and more likely to use a low-level offense like cannabis possession to usher people into the prison pipeline, there’s absolutely no call to overtax local cannabis companies in order to fund shiny new police cruisers.

Not only is $1.3 million an incredible amount of money to charge any small business, but most of Haverhill’s mitigation fees aren’t even helping the community create better public health outcomes. They’re funding even more harm via overpolicing.

Cannabis businesses like Stem pay their taxes, create local jobs, provide legal weed for their community, and abide by the rules of their host town agreements. When will these hard-working local business owners stop being treated like public nuisances? When will Haverhill start treating their cannabis stores like the essential businesses they truly are?