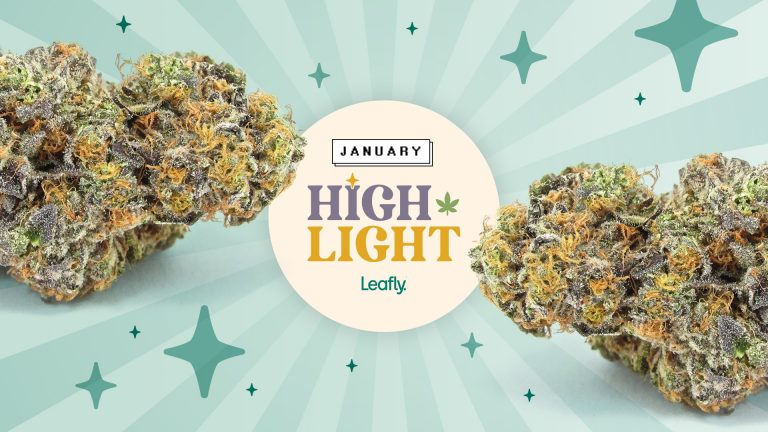 Smokers across the US are becoming super-fans of the surging all-star strain Gary Payton.

Since its 2019 release, Gary Payton has become a top 200 most popular variety nationwide—in stores from Los Angeles and San Francisco to Miami and Boston. The NBA Hall-of-Famer licensed his name to the strain. But you need not enjoy sports to love the strain’s heavy-hitting hybrid indica effects, and its sweet, fuel, and stone fruit taste. Gary Payton flower goes into joints and bowls across the US, and it’s super popular in cartridge and dab forms, too.

All these factors and more make the officially licensed Gary Payton the starting Leafly HighLight strain for 2023.

Bred by Kenny Dumetz of Powerzzzup Genetics in San Francisco, and co-selected by cannabis mogul Berner of Cookies—Gary Payton has an average review score of 4.6 out of 5 from 249 reviews.

Leafly reviewers consistently say G.P. makes them giggly, talkative, and relaxed—great for these cold, dark, and rainy winter days. Gary Payton warms and brightens moods as an after-work treat for getting your stuff done.

“It’s a rainy night right now and it’s making me happy as fuck so 5/5,” said one reviewer.

“Best giggly strain on the planet,” said another.

One reviewer wrote: “DEPRESSION CURED. ANXIETY CURER. grammarly is on and i stil cant spell.”

“If you don’t want munchies I don’t recommend it,” said another.

“I tried opening my apartment’s front door with my debit card until I realized while I was in the motion of putting the card in the key slot.”

One reviewer said, “this strain made my friend reverse puberty. He was talking in the highest voice possible for about 30 mins.”

How much does Gary Payton cost?

On the West Coast, Gary Payton’s so popular that it approaches commodity prices. As you head east, supplies are lower and G.P. gets more expensive. Oregon has $3 half-gram pre-rolls of G.P. and $30 1-gram dabs. Florida has $50 eighths and $74 grams of live resin.

Gary Payton prices across the US:

Wanna grow some G.P.? Good call. The problem is: Lots of reputable seed outlets have sold out of authentic G.P. genetics, so beware of less reputable outlets. (One group of charlatans sells G.P. seeds for $50 per seed.)

Gary Payton is a sibling of Cereal Milk off The Y line—that’s champion genetics right there. Notably, two Gary Payton hashes have taken home the most recent awards: a Gary Payton hash took 1st place in the 2022 Errl Cup in Arizona; and a 2nd in 2022’s The Emerald Cup. A Gary’s Wedding won 3rd in the Oregon Grower’s Cup 2022, and a G.P. took first place for pinene terpenes in the 2022 Cowboy Cup in Oklahoma.

The aroma molecules (aka terpenes) of Gary Payton offer a collection of what’s hot in pot. It’s got caryophyllene which brings the gas (some might call it ‘pepper’). Lab tests also show a lot of limonene and pinene, two more astringent, biting terps that contribute to G.P.’s power.

Other highlights this January

Can’t find our HighLight? No harm, no foul. Here are three more analogous flavors to savor.

NBA Hall-of-fame player Gary Payton earned the nickname “The Glove,” and now it’s the official name for the Gary Payton x Leafly Strain of the Year 2022 Jealousy cross from Seed Junky Genetics with Powerzzzup. Again, you’re in the Cereal Milk meets Gelato wheelhouse, so expect thick, sweet, dank fuel and fruit smells with unstoppable power. The indica hybrid effect is relaxing and great for riding out the long winter.

The hot-hot new-new for 2023? Blackberry Gary—LA breeder Serge Cannabis’ cross of Gary Payton to Sunset Sherbert and Zkittlez Bx2. Blackberry Gary brings together the genetics behind blockbuster hits like Cereal Milk, Sherbert, and Z for a super-flavorful potent smoke. Serge grows small batches of Blackberry Gary at Cookies Maywood in LA and distributes them in Cookies stores and beyond. The extremely strong hybrid effect warrants sharing with a connoisseur while gaming on your new Playstation 5.

Georgia Pie has the same acronym as Gary Payton (G.P.) and elicits similar effects as the above strains, but with different parents. It’s Kush Mints x Gelatti from breeder Seed Junky Genetics and earns its name with a peach, apricot, and tree fruit taste. The hybrid effect hits uplifted, happy, and hungry, and also pairs well with eating, sleeping, and chilling. Georgia Pie x Z ounces from NorCalCannabis became our favorite buy from The Emerald Cup Harvest Ball.

And that’s our Leafly HighLight for January 2023. Hope they helped. Stay warm and cozy, Leafly Nation. We’ll see you on Feb. 1 with the annual Love Edition of Leafly HighLight. Rawwr.

to select one cultivar that pairs with the season or mood. Leafly HighLight.