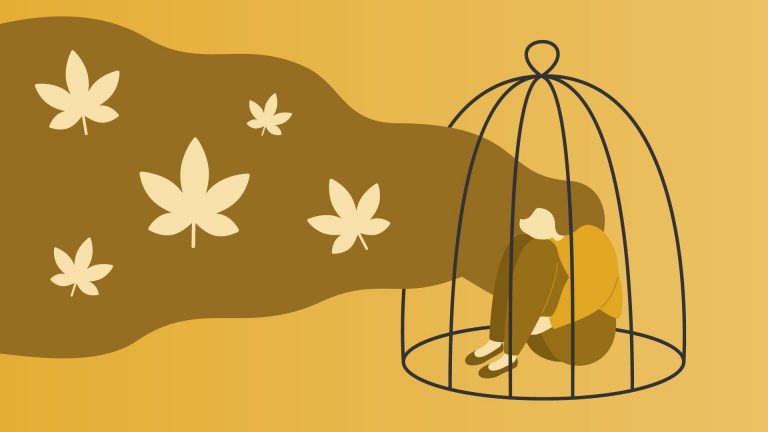 Humans are pleasure-driven, reward-oriented beings. We have a built-in reward system, and love to feel good and seek out experiences and substances that evoke enjoyment. However, when we rely on substances to provide us with this feel-good high, our internal reward system can become dysregulated and dysfunctional, leading to addiction.

Chronic cannabis consumption can turn into problematic use that can detrimentally affect physical and mental well-being, relationships, and daily life. And while the vast majority of cannabis consumers will not become addicted to the plant, it’s helpful to understand how cannabis misuse affects the brain, which cannabinoids can prompt addiction, and behaviors that can contribute to cannabis use disorder.

Additionally, while some research suggests that cannabis can contribute to addiction, the plant may also be a form of addiction treatment.

People can get addicted to many different things, but chemical or substance addictions are the most common. Chemical addictions include drugs, alcohol, cannabis, or even caffeine (yes, it’s a real thing). There are diverse ways to talk about chemical addictions, including dependence, misuse, and abuse, but all are grouped under the broader umbrella of substance use disorders.

A chemical addiction is when an individual’s use of a substance disrupts their daily life, detrimentally affects their relationships, and hinders their ability to work. Dependence is so overpowering that they can’t stop using the substance, even though they want to quit.

Scientists generally agree that addiction is a repetitive cycle defined by three stages:

An addiction to cannabis also conforms with these three stages. A formal diagnosis of cannabis addiction is referred to as cannabis use disorder.

Does cannabis help or worsen depression?

What is cannabis use disorder?

Cannabis use disorder (CUD) can be defined as the inability to stop consuming cannabis even when it is causing physical or psychological harm. This definition not only captures addiction but also includes individuals who may be dependent on cannabis and negatively impacted by it.

Can cannabis addiction alter the brain?

Addiction also impacts how we self-regulate. Self-regulation refers to our ability to wield control over our choices, impulses, feelings, thoughts and behaviors. When we become addicted to cannabis, the desire to consume the plant may sway our choices and actions in ways that are sometimes harmful.

Cannabis addiction can also cause responses to stressful situations to become dysfunctional. For example, it’s normal to feel a spike in stress levels in response to a near-miss on the highway, or witnessing an argument. Stress causes the release of hormones like cortisol and adrenaline to prepare the body for fight or flight.

Research has shown, however, that long-term, heavy cannabis users often have a blunted response to stress—they don’t produce as much cortisol in stressful situations, and therefore don’t feel the acute effects of stress as much.

While this could be a good thing—many of us could benefit from feeling more chill in the face of everyday stressors—it could also be a disadvantage, as cortisol facilitates the release of energy that helps us to react to threats or dangers. In other words, cortisol helps us move swiftly when we need to make a speedy getaway.

Does cannabis interact with antidepressants?

Cannabis and the dopaminergic system

One of the most researched ways in which cannabis addiction alters brain function is through its effects on the brain’s dopaminergic system, which is responsible for releasing dopamine, a molecule produced in the brain that significantly influences how we experience rewards.

A toke of weed can deliver a dopamine hit that provides you with a euphoric high. However, repeated cannabis use can increase dopamine release to unnaturally high levels, which can reinforce addictive effects.

“Cannabis, when used correctly, can lead to feeling good,” explained Dr. Jordan Tishler MD, faculty at Harvard Medical School, President of the Association of Cannabinoid Specialists, and CEO/CMO at inhaleMD. “This is believed to be related to the indirect stimulation of the dopaminergic system—the system that has been implicated in addiction.”

However, it’s essential to point out that cannabis use must be chronic before addiction can take place. You can’t get addicted to weed from smoking one joint. Addiction arises when the brain’s reward system gets repeatedly stimulated, which then alters how it functions.

Cannabis and the endocannabinoid system

According to Tishler, cannabis misuse can lead to downregulation of endocannabinoid receptors, leading to fewer receptors circling in the brain—so their ability to pick up messages from the body’s normal endocannabinoid pathway is reduced. “In this way, the endocannabinoid system of the individual becomes dependent on the supply of cannabis-supplied cannabinoid,” said Tishler.

It appears that THC is the main culprit in downregulating the body’s CB1 cannabis receptors. With fewer receptors available, the brain becomes increasingly tolerant and desensitized to the rewards of THC. Therefore, increasingly large amounts of THC are needed to achieve a high.

Fortunately, however, this alteration isn’t permanent. A study of daily cannabis smokers found that the density of CB1 receptors returned to normal levels in almost all parts of the brain after four weeks of abstinence.

What is the endocannabinoid system and what is its role?

Are some more vulnerable to cannabis addiction?

While altered brain chemistry undeniably plays a key role in cannabis addiction, it’s important to also recognize that addiction is a multifaceted disorder caused by diverse interlocking factors. Genes, lifestyle, home and work environment, and socio-economic status can all play a role in addiction.

Beyond consumption patterns, evidence is emerging that suggests certain individuals are more likely to develop a cannabis use disorder than others.

Individuals with mood disorders, such as depression, are also 4x more likely to become heavy users of cannabis, increasing their risk of cannabis use disorder. However, there is some contention about whether heavy cannabis use may also contribute to depression.

Is cannabis more or less addictive than other substances?

Although there’s a saying that comparisons are odious, sometimes they’re useful in providing context. Comparing cannabis to other commonly abused substances of abuse suggests that it’s the least likely to lead to dependence.

A 2015 review that weighed up more than two decades of research found that individuals who use cannabis are less likely to develop a dependency than users of almost any other substance, including nicotine, heroin, cocaine, alcohol or stimulants.

The researchers found that the lifetime risk of developing a dependence on cannabis was about 9%. Nicotine came in at 32%, heroin 23%, cocaine 17%, alcohol 15%, and other stimulants scored 11%. This comparatively smaller likelihood of dependency may be because cannabis releases less dopamine than other addictive substances.

Can cannabis help with addiction?

While THC can contribute to addiction, another cannabinoid present in the plant, CBD, or cannabidiol, may help treat dependence. Research is still very much in the early days, but data suggest that cannabidiol may help as an intervention for diverse addictions without inciting addiction itself.

While further clinical trials will be helpful in clarifying and consolidating these results, there’s a certain poetic irony that the same plant can contribute to the problem, and provide the solution.