How to get weed in every province in Canada 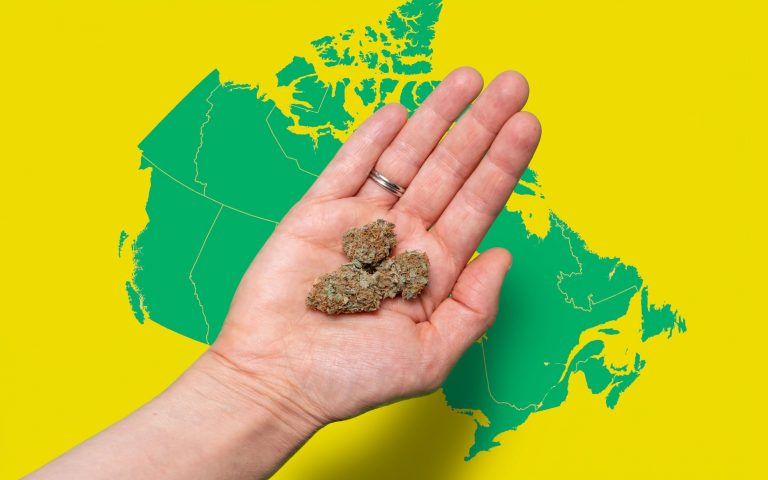 How you buy cannabis in Canada depends on where you live, since regulations vary by province. This means how you access legal products is different across the country. And the ways you can legally buy cannabis are continuing to evolve.

Prior to adult-use legalization, there was only one way to buy legal weed in Canada: from a medical provider and delivered through the mail. While medical cannabis patients must still purchase their products through the mail-order system, recreational products can be bought in a variety of ways.

Three years into legalized cannabis, most provinces and territories have physical storefronts, either government-run or through private retailers, as well as some sort of online ordering system. And a few provinces now allow, or have plans to allow, consumers to purchase directly from a producer or grower, usually called “farmgate” sales.

Where to buy weed in Ontario

Ontario, Canada’s largest cannabis market with 15 million people, has one of the more diverse retail systems. There are more than 1,000 approved private retail stores in Ontario, with new stores continuing to be approved.

If you want to buy cannabis in Ontario, you can shop online at the government-run Ontario Cannabis Store, in-store at a privately owned retailer, or order directly from a private retailer.

Ontario didn’t originally allow private stores to sell online, but that changed when the pandemic hit. An emergency measure in April 2020 temporarily allowed cannabis stores to do curbside pickup and delivery.

Delivery is limited to store staff directly delivering the cannabis to consumers, rather than using a third-party delivery service (like Uber or Pineapple Express). If delivery isn’t your thing, a few cities even offer drive-thru options at their retail stores.

Then in October 2021, as part of a broader “Red Tape Reduction Package” for Ontario businesses, the provincial government proposed to make those allowances permanent.

The bill still needs to be debated and passed before potentially coming into effect, but in the meantime, cannabis retailers in Ontario continue to enjoy the allowance under the emergency measure.

Ontario also became the first province to allow cannabis farmgate sales earlier this year, with the first store opening on April 20. Farmgate stores allow consumers to purchase cannabis where it is grown, offering a different experience than a retail store.

Where to buy weed in British Columbia

In July 2021, BC announced they were allowing private retailers to engage in-home delivery of cannabis products. One retail christened their first delivery in a motorcycle and sidecar.

The allowance was built upon a rule change from August 2020 that allowed private cannabis stores to do online sales and curbside pickups due to concerns related to COVID-19.

How cannabis is sold is largely up to the provinces, and each region will continue to build systems that fit their own unique identities.

Like Ontario, home delivery can only be done by the retailer and not through third-party delivery services or the mail. BC also recently announced that retailers can sell cannabis accessories like books and clothing.

British Columbia has also announced their plans for farmgate sales sometime in 2022. Although details on the plan are still limited, the province has said they want to focus on helping small cannabis farms.

Where to buy weed in Alberta

Alberta has a system with over 700 private retail stores (and growing!) and manages all online sales through a provincial store.

However, the provincial government recently introduced legislation that, if passed, will end online sales of cannabis through the Alberta Gaming, Liquor & Cannabis (AGLC), allowing private retailers to take on those services.

This followed a survey the AGLC sent out to retailers in June 2021 to gauge retailer interest in taking part in online sales.

Where to buy weed in Manitoba and Saskatchewan

Manitoba and Saskatchewan only have private retail cannabis stores, with over 100 locations in each province. They are the only provinces that have never managed online sales themselves, opting to have individual stores choose to manage that option.

Cannabis retailers are permitted to deliver products via their own staff, or even through third-party delivery services. This means that in Manitoba and Saskatchewan, you can order weed like pizza, without ever having to leave the house (or waiting on the postal service).

At the moment, Manitoba is also considering legislation that would shift the liability for that cannabis to the third-party delivery agency rather than the cannabis retailer.

Where to buy weed in Newfoundland

The province began allowing retailers to offer delivery as an option for consumers earlier this year and also allows retailers to operate a drive-thru window.

Although the province has said they are open to farmgate sales, no producers have opted in yet.

Where to buy weed in Quebec, New Brunswick, Nova Scotia, and PEI

New Brunswick’s government recently announced legislation that, if passed, will allow for privately owned cannabis stores to operate in the province as well. The stores will still operate under the banner of Cannabis NB.

New Brunswick also announced their own cannabis farmgate program earlier this year, with two now currently operating in the province. Consumers can buy locally made cannabis products, as well as seeds and plants at participating locations.

Cannabis in the territories has several different approaches.

In the Yukon, consumers can purchase from a handful of private stores. Until recently, online sales were managed exclusively by the territory, but new legislation that was recently passed is opening up that option to private retail stores.

Those in the Northwest Territories can buy their cannabis from one of six privately owned stores. Online sales are managed through Releaf NT; however, in-person deliveries are still not allowed in the territory. The owner of Releaf NT says there have been discussions about allowing this in the future in the Yellowknife area where they are located.

Nunavut is the only jurisdiction in Canada that allows residents to order directly from cannabis producers. They must be approved by the territorial government, and currently, there are only two approved producers.

Overall, brick-and-mortar stores dominate cannabis sales, with the vast majority of purchases in every province coming from in-person visits.

Based on provincial reports, online sales tend to be a small portion of overall sales, sometimes only a few percentage points. Farmgate sales are still quite new, making it too early to gauge annual sales figures.

Canada’s retail system will continue to evolve. Although store numbers in several provinces continue to grow, there are expectations of closures and consolidations in some.

How cannabis is sold is largely up to the provinces, and each region will continue to build systems that fit their own unique identities.

David Brown has been working in and writing about the cannabis industry in Canada since 2012. He was formerly the Editor in Chief and Communications Director for Lift Cannabis and Lift News, a Senior Policy Advisor for Health Canada’s cannabis legalization branch, and is the founder of StratCann Services Inc.