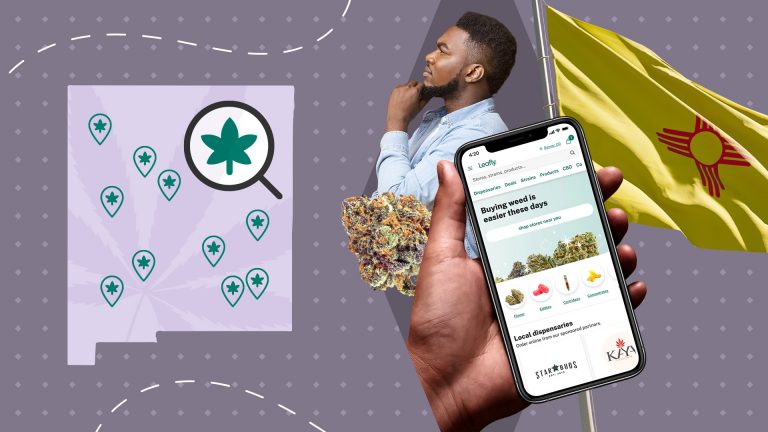 Retail cannabis sales for all adults will begin on Friday, April 1, 2022, in New Mexico.

And unlike in most of the other rec-legal states, where individual municipalities and counties have the ultimate say in allowing sales, New Mexico’s legalization law requires all local governments to permit cannabis dispensaries. As a result, 118 medical dispensaries will be open for recreational buyers starting on the morning of April 1.

Keep reading to find out where you can purchase the plant, how to navigate national parks and tribal lands with marijuana, and the particulars of New Mexico’s adult-use cannabis law.

The Leafly app lists stores near you

We’ve called ahead and confirmed the stores that definitely will be open for recreational sales on April 1. Don‘t forget to bring your cash and state-issued ID.

Download the Leafly app to locate the nearest store with a single tap.

They’re not legal yet.

In crafting the state’s adult-use cannabis program, New Mexico officials offered some guidance on cannabis consumption lounges, where adults can use the plant legally in an indoor venue similar to a hookah lounge. But those plans have yet to materialize. For the time being, marijuana consumption is legal only at private residences where the owner has given permission for people inside to use the plant.

Unlike dispensaries, cannabis lounges are subject to local laws and regulations – meaning local governments can ban them altogether.

New Mexico’s popular national parks might seem like perfect places to light up while beholding a plethora of beautiful natural scenery. But it’s important to remember that national parks are federally operated and regulated, and that possessing, selling, or consuming cannabis on federal land is still illegal.

Getting busted with weed in national parks can lead to huge penalties, including criminal convictions, fines and probation—even for residents of marijuana-legal states.

Tribal reservations, which are considered their own sovereign nations, may also soon offer cannabis sales.

While federal law generally applies on the reservations, New Mexico’s tribes have signed a compact with the office of Gov. Michelle Lujan Grisham to negotiate separate deals with state authorities to permit dispensaries.

A state spokeswoman said while no agreements have yet been made, the Ohkay Owingeh Pueblo and the Picuris Pueblo tribes have both began negotiations to open marijuana stores on their lands in the coming months.