How Mila Kunis got ‘Stoner Cats’ made with NFTs 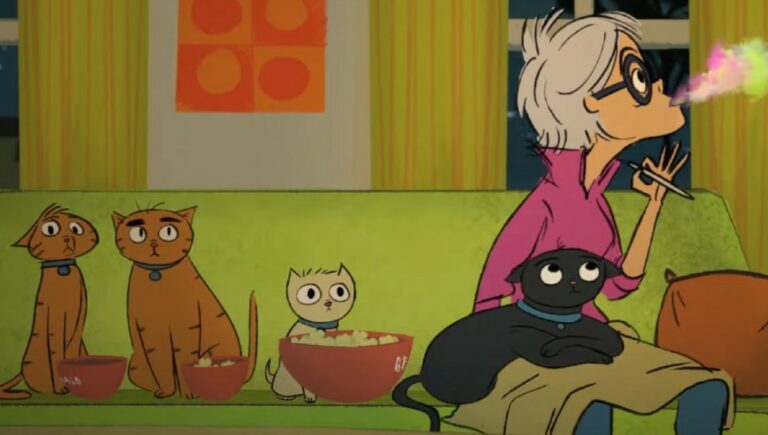 On one level, Stoner Cats is a rather charming animated series about a groovy elder woman (voiced by Jane Fonda) and her five feline friends. One fateful day the cats accidentally get high on the old lady’s supply and find themselves sentient. On another level, it’s an experiment in alternative financing via the emerging world of Non-Fungible Tokens (NFTs).

The show’s animated world, according to an online FAQ, is brought to life by “the creative forces behind Toy Story 2, Spider-Verse, Happy Feet, Cryptokitties and much much more…”

The crypto and NFT world is buzzing about the new series, but Stoner Cats the show has nothing to do with NFTs and everything to do with CATs on THC. The first (and so far only) episode is available on YouTube.

Pitching the idea to Hollywood

The traditional way to raise the money required to make a top-flight animated series is by pitching the idea to Hollywood, which these days includes everything from movie studios to television networks to streaming platforms.

An old lady and her cats getting baked was too hot for Hollywood to handle.

Mila Kunis (That 70s Show, Black Swan, Forgetting Sarah Marshall) and her production company Orchard Farms originally went that route with Stoner Cats, after developing the idea internally for more than a year.

But even with Kunis’s star power, they found “the drug content was a detractor” from getting quality offers. This despite wanting only to tell a heartwarmingly wholesome tale, one inspired by the mother of series co-creator Sarah Cole, who turned to medical cannabis as a treatment for Alzheimer’s.

Apparently, an old lady and her cats getting baked is too hot for Hollywood to handle. Stop and think about that next time you see a movie poster where the selling point is a promise to deliver epic levels of ultra-violence.

Plan B: cryptocurrencies and NFTs

Fortunately, Mila Kunis spent her quarantine time fully immersing in a disruptive new tech play, one with the potential to undermine the old media gatekeepers.

“Some people took up baking or knitting, I deep dived into crypto and NFTs,” she told Conan O’Brien on his late night talk show in June. “And then I thought, ‘Well, that was fun,’ so during the pandemic I helped create a piece of entertainment called Stoner Cats that we will be releasing soon. You can buy a NFT stoner cat and then that is your token.”

Conan, for the record, didn’t seem to understand NFTs any better than most people. But he definitely dug the Stoner Cats vibe, as evidenced by the fact that he smoked a joint live on camera less than a week later while interviewing Seth Rogen.

“Cats just sit around anyway,” Conan joked to Kunis. The implication being: Why shouldn’t they get stoned?

When the Stoner Cats team released their first batch of 10,420 NFTs in late July, the entire run sold out in 35 minutes—bringing in around $8.3 million.

Now do you want to know what an NFT is?

Fortunately, there’s a wide range of online explainers to choose from depending on your level of interest and technological acumen. For the purpose of this story, it’s most important to understand that each of those 10,420 NFTs represents a unique Stoner Cat illustration that’s stored in the blockchain, the same way cryptocurrency is stored.

People who spent $800 for a Stoner Cat NFT to call their own did so for a variety of reasons, including wanting to support the show’s creators and creation, wanting to own a piece of “non-fungible” art, and wanting to potentially get in on the ground floor of a lucrative investment opportunity, as there’s lately been a boom in the NFT art and collectibles market.

Already the highly-sought-after Ms. Stoner NFT token has been re-sold on a secondary market at a $60,000 profit. The current holder now has it listed with a sale price of $81 million worth of Ethereum.

Speaking of Ethereum, the crypto currency’s co-founder, Vitalik Buterin—one of Time magazine’s 100 most influential people of 2021—also lends his voice to the Stoner Cats cast. But he’s mostly just along for the ride.

The project’s brain trust is The 3050 Gang, one of the first all-female crypto teams to have a major impact in what co-founder Mila Kunis describes as a very male-dominated field. And their goal isn’t simply to mint money, advance NFTs and make a show about some seriously stoned cats. Their higher aim is to pioneer a new funding model for creative projects, one that puts artists directly in collaboration with the public.

Technology aside, buying a Stoner Cats NFT is not much different from buying an old Disney animation cell, except instead of getting it second-hand from a collectables shop, you can go direct to the artist. It’s basically a new form of crowdsourcing that includes a chance to own a potentially valuable part of the very creation you’re supporting—and putting the means of production in that artist’s hands.

“Consumers want to see and hear stories that otherwise wouldn’t be produced,” Morgan Beller, general partner at the 3050 Gang, explained on an episode of the NFX podcast. “Consumers also want to share in some of that creative control (and deservedly so) and to belong to something.”

Is this an investment, a contribution, or just hype?

Is there an element of hype to NFTs in general, and Stoner Cats specifically? Undoubtably. Hype is a natural part of art, investment, entertainment, and any possible combination of the three.

But as things stand, a humble little show about a bunch of high-flying felines just went to series without asking anyone’s permission or making a single artistic compromise. If thousands of people dropped millions of dollars to buy a cartoon cat because they hope for a return on that investment, how is that any less rational than collecting stamps or Picassos?

For that matter, when Hollywood financially backs a movie, the studios and streamers most emphatically expect a return on their money. So why should this be any different?

Still, even after the first run of Stoner Cats NFTs sold like cat nip, the project’s backers continue to carefully play down the investment angle in favor of more utopian ideals, like community-supported art and expression.

After all, as Ms. Stoner herself says in the premiere episode, “material possessions are a social construct.”