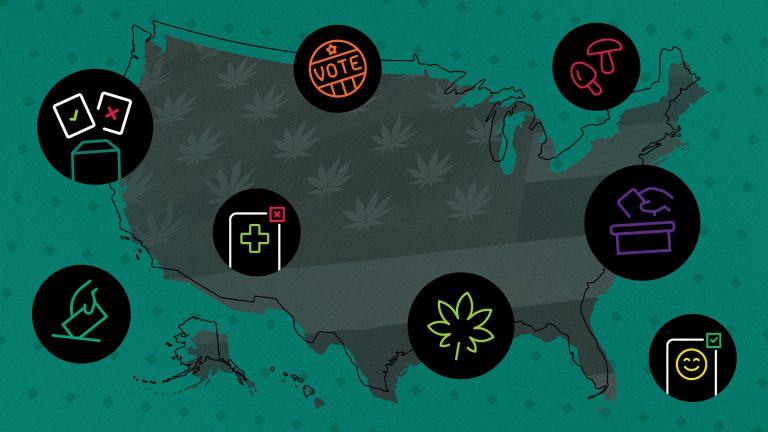 Bookmark Leafly’s election page and return often. No matter what your political persuasion, we’ll provide good news and glad tidings. Legalization is marching on! Hang with us and watch it grow.

The links below lead to full Leafly guides to the individual state measures.

Each measure needs 50.01% to win. Results are updated as soon as state officials release the first totals. First results are expected at 8 p.m. EST / 5 p.m. PST.

Here are the voting times for the five cannabis legalization states in play.

Big John coming out strong for legalization in Arkansas

Legendary golfer John Daly, one of the most beloved figures in the Razorback State, posted a strong message in favor of Issue 4, cannabis legalization, on the eve of the election. “It’s been done in 19 other states and the sky didn’t fall,” he says.

No easy way to spin this one: The Arkansas Poll, taken by a team at the University of Arkansas, predicts a significant loss for that state’s legalization measure. Previous polls have shown a tight 50-50 race, but this new poll found that 60% of voters oppose Issue 4.

The one bright spot: The average age of respondents to the survey was 63. As a rule, the older the age demographic the less likely a voter is to support legalization.

In Maryland: Already preparing for a legal market?

One week prior to Election Day, the Maryland House of Delegates’ Cannabis Referendum and Legalization work group reviewed a report on the state’s potential legal industry. In other words, they’re getting prepared for Question 4 to pass.

As Maryland Matters reporter William J. Ford noted, “if voters approve legalization by voting for Question 4, more work would have to be done, such as altering civil and criminal cannabis-related penalties, establishing a fund to assist small and minority-owned businesses and establishing a health advisory council to assess, study and promote public health campaigns on cannabis.”

Every two years Rick Steves, the PBS travel show star, donates significant amounts of his own cash and copious chunks of time to campaign for legalization measures on the ballot. Partnering with NORML, he barnstorms state to state to appear on the local TV and radio stations that actually reach undecided voters. Rick Steves opens minds and changes votes.

Here’s a clip of him in action recently in North Dakota.

Meanwhile, things are trending up in Missouri

A much more recent Survey USA poll (taken Nov. 1) found that 61% of Missouri voters surveyed said they planned to vote for cannabis legalization. The poll asked 791 likely voters, so it’s not an enormous sample size, but it does bode well.