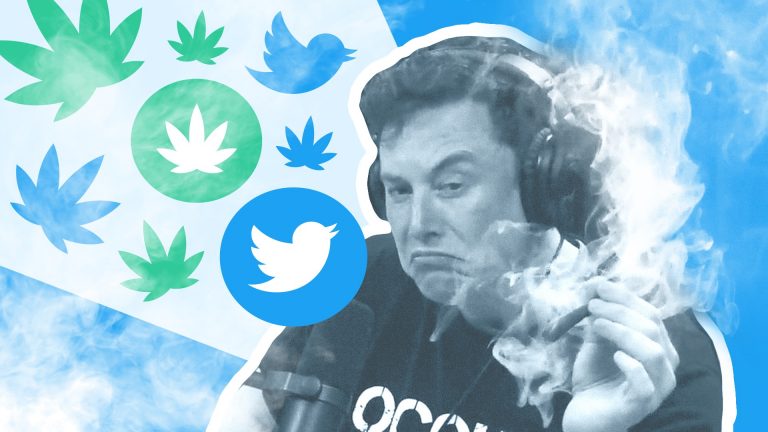 What began as a fun what-if last week ended as a startling fait accompli this afternoon: Twitter has accepted Elon Musk’s $44 billion bid to buy the company.

In the cannabis world, that deal could have profound ramifications.

The Tesla founder has been famously outspoken about his belief in cannabis legalization. In late 2018, Musk lit up a joint on the Joe Rogan Experience, inhaled, and launched a million memes.

In the summer of 2020, Musk added his voice to the chorus of those working to free America’s cannabis prisoners.

“Selling weed literally went from major felony to essential business (open during pandemic) in much of America & yet many are still in prison,” he wrote. “Doesn’t make sense, isn’t right.”

Musk isn’t so much an advocate as an ally. He’s not the guy who’s bankrolling state legalization campaigns; he’s the uber-bro with massive cultural influence who says, loudly: Prohibition is stupid.

Will that change things?

Anyone who works in cannabis can tell you: Social media platforms do not play well with weed. The continued federal prohibition of marijuana makes the major platforms—Facebook, Instagram, YouTube, Twitter, TikTok—extremely nervous. They often express that trepidation by blocking posts, enacting shadow bans, or deleting entire accounts.

It’s hard to find a cannabis company that hasn’t been blocked or banned from at least one social platform.

It’s hard to find a cannabis company that hasn’t been blocked or banned from at least one platform at one time or another.

Often the bans feel capricious. A post that seems utterly harmless can get flagged for violating a platform’s terms of service, while an edgier post can shine on with no trouble at all. What did we do wrong?!? is an anguished cry that nearly every cannabis social media manager has shouted to the heavens.

These mysterious cannabis policies exist on a spectrum. On the far side of strictness sits TikTok, which allows no cannabis content whatsoever. Don’t even try. The Google-owned YouTube can be tricky, but it allows cannabis content within reason. Then there’s Instagram and Facebook, both owned by the parent company Meta. Because of the nature of the cannabis audience, Instagram is currently the most important and influential platform, and also the one that gives social media directors absolute fits when it comes to cannabis content.

Jungle Boys, one of the nation’s top cannabis brands, gave a wink to that situation earlier today:

The platform Musk just purchased has a reputation as being one of the most liberal in its treatment of cannabis. There’s upside and downside to that.

The upside is that Twitter is the best fit, culturally and temperamentally, with Musk himself. His public persona is much closer to that of the swashbuckling libertarian Jack Dorsey (Twitter’s founder) than to the aggressively flavorless Meta leader Mark Zuckerberg.

If anything, we should expect Twitter’s cannabis policies to relax even further under Elon Musk. Consider this tweet he put out upon the acceptance of his bid this afternoon:

Better gatekeeping, or an ugly free-for-all?

Musk’s championing of free speech could make Twitter the most 420-friendly platform—but it could also turn the entire Twitterverse into an ugly free-for-all of political propaganda, unchecked conspiracy theories, and hate speech.

It’s not just his company, it’s his voice

Beyond the changes he might enact at Twitter, Musk could change the environment for cannabis simply by virtue of his new role in the social media universe. After hearing about Musk’s bid over the weekend, I reached out to Arend Richard, the founder of WeedTube. Richard has been one of the leading advocates for social media freedom and fairness when it comes to cannabis. He founded WeedTube back in 2018 after finding himself blocked by YouTube for an innocuous cannabis post. Four years later the 420-friendly WeedTube is thriving, readying an ambitious new update to their app expected to launch later this summer.

“As a cannabis business owner and influencer, Twitter has been relatively easy to work with,” Richard told me. “But I want to get in touch with Elon, because we need him to help bring awareness to the situation with Meta” and their platforms.

Richard is currently gathering signatures on a petition demanding that Instagram reform its community guidelines “to treat all legally operating cannabis businesses equally.”

The heart of the grievance? Unequal enforcement, according to the petition:

“Instagram continues to suspend and delete the pages of licensed and legal cannabis companies for violation of their vague and outdated policy prohibiting “attempts by individuals, manufacturers and retailers to purchase, sell or trade” marijuana. This policy is not enforced equally, with large multi-state corporations being allowed to promote their products and locations, while smaller, independent operators lose access to their Instagram pages, which are essential marketing tools in 2022.”

Influence others by eating their lunch

Can Elon Musk demand a change in the policies of Instagram? Of course not. This is a situation where he could force a change, however, by simply opening his arms to cannabis companies and then gaining ground on Insta.

The Meta-owned giant has nearly ten times as many active monthly users as Twitter. Instagram is younger, hotter, and more hip. If a Musk-over of Twitter can change that perception and eat into that lead, Instagram could be forced to reconsider its stodgy and outdated cannabis policies. And that could lead to a change in the other Meta properties as well.

There are no guarantees, but it could work. Elon Musk alone couldn’t force GM and Ford to start making electric cars. The success of Tesla forced them to follow his lead or become obsolete. Let’s see what he can do with social media.

The Haymaker: Getting the people all riled up