Can cannabis help your workout? 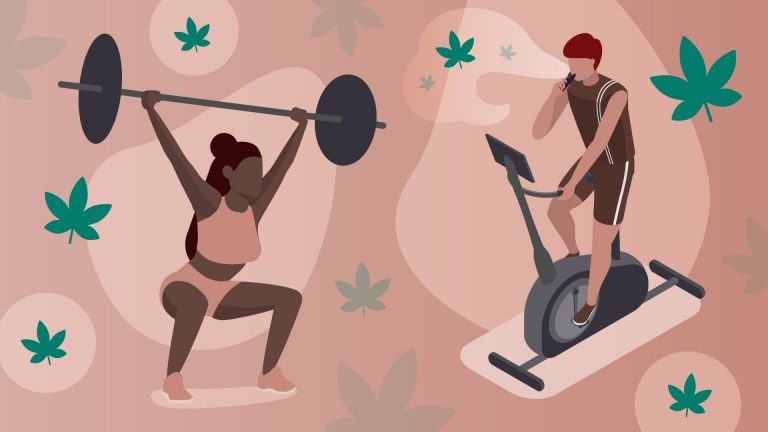 Nothing beats being in the flow of a kickass workout. Whether your feet are pounding the pavement, your arms pumping while lifting kettlebells, or your glutes firing while swimming across a pool, a great workout session will leave you feeling fantastic.

The problem for many, though, is finding the motivation to get started. When the moment comes to tie on your running shoes, waves of excuses can quell the best of intentions to get moving.

But for some people, weed may be the answer to overcoming workout apathy and enjoying exercise. While there’s long been an assumption that cannabis users are less likely to work out thanks to stereotypes of sedentary stoners, there’s growing evidence that cannabis users have a positive relationship with exercise.

Read on for more on how cannabis can impact your workout, and find out more about how people combine weed and exercise.

Why do people use weed before or after working out?

Much of our understanding about cannabis and exercise comes from surveys and anecdotal reports over the last few years. Factors such as recreational legalization, increased access to weed, and a decreased perception of risk have made researchers curious to learn more about how the plant influences different aspects of lifestyle and health. However, federal restrictions make it challenging to run controlled cannabis studies.

In a survey of 605 cannabis users (creatively named “The New Runner’s High?”), as many as 81.7% of participants endorsed consuming cannabis with exercise. The majority of these users cited specific benefits such as increased motivation, enhanced enjoyment, and a more rapid recovery. Additionally, 37.5% claimed it improved performance.

Consumers showed preferences in the method of consumption too: Cannabis flower and concentrates were more commonly used than edibles by those who worked out with weed.

Researchers dug further into the data to find out more about the exercise habits of people who use cannabis up to four hours before or after they engage in exercise. Of those surveyed, 68.9% used weed within one hour before exercise, while 82% used cannabis within four hours after exercise. Sixty-seven percent of participants opted for cannabis both before and after exercise.

These consumers carried out aerobic exercise (like running) an average of 159.7 minutes per week, compared to those who didn’t consume weed at all, who exercised for an average of 103.5 minutes.

Forty percent of these cannabis consumers met or exceeded the recommendations of the American College of Sports Medicine to complete a minimum of 150 minutes of aerobic exercise per week, while only 28.7% of non consumers did.

Other fascinating data collected by Whitney Ogle, a physical therapist and cannabis researcher at Humboldt State University, shows that the 131 survey participants reported more than 55 physical activities they enjoyed when high. Sixty percent liked to hike when stoned, 58% favored yoga, and 50% leaned toward aerobic machines.

Their main reasons for using cannabis before physical activity were “helping focus/concentration” (66%), “enjoying the exercise experience” (65%), and “enhancing the mind-body-spirit connection” (65%). However, 25% of users also shared that consuming weed before exercise sometimes led to unexpected negative experiences, such as an elevated heart rate or being too high to continue working out.

Is there evidence that cannabis can impact exercise performance?

When it comes to explaining why cannabis can induce uplifting, motivational effects, researchers don’t yet have a clear answer. One hypothesis is that exercise elevates levels of anandamide—a cannabinoid produced in the body that stimulates feelings of happiness and well-being. Cannabis targets the same receptors as anandamide, so using weed before a workout might help consumers get a head start on feel-good vibes.

Another theory is psychological: If cannabis enhances the enjoyment of exercise, that may create a positive feedback loop that encourages someone to do it more.

There’s not much evidence to suggest that cannabis use enhances or exacerbates athletic performance. In one recent review, researchers found no significant difference between users and non-users with respect to peak workout capacity, cardiorespiratory fitness, perceived exertion, strength and endurance, or blood pressure. In other words, weed doesn’t appear to give you a competitive edge that will make you stronger, run longer, or lift heavier weights.

The researchers even checked out the effects of chronic cannabis use on athletic performance, and again found no proof that heavy use—defined in most cases as at least once per week—significantly impacted workouts. The only apparent difference in one study was that chronic cannabis users had a slightly higher resting heart rate.

Ultimately, the study’s authors concluded that given the findings, there’s little reason for sporting regulatory agencies to place restrictions on cannabis use.

How set and setting affect cannabis and psychedelic experiences

How to use weed with your workout

Some people actively support working out with cannabis, for example, Stoned+Toned, an online workout platform created by Mike and Morgan English, cannabis consumers who want to share a vision of a fun, 420-friendly fitness with the community. Workouts average 30 minutes, and include high and low intensity classes, Puff and Pedal for spin fans, and Wake and Bake for the yoga inclined. There are even classes filmed on location at hemp farms.

“When I discovered cannabis, for the first time in my life, I felt a natural pull to go work out,”
reflected Morgan. “The connection between my mind and my body was strengthened.”

The business is largely online because they “wanted people to be able to consume freely, without judgment, and work out in a place where they felt safe,” according to Morgan. They also host live pop-ups to build community, with members lighting up collectively before moving together for 45-60 minutes. At the end of the session, members can have a puff and connect.

Mike and Morgan believe that cannabis can support movement in a number of complementary ways.

“Not only does it help with pain management and inflammation, allowing people to work out without pain, cannabis really deepens the mind-body connection,” said Morgan. “The ability to tune into your body on a deeper level helps you work out successfully.”

Morgan and Mike prefer to smoke or vape as those methods enable better control of their highs, and they’ve found that most Stoned+Toned members partake in the same way. Individuals with asthma, however, usually opt for low-dose edibles. Regardless of the delivery method, they believe what’s most critical is consuming thoughtfully.

“You only need a few hits of your joint or a low-dose edible to get in the right mindset for movement. With smoking, we always cue taking a hit or two at the beginning and end of our classes,” said Morgan.

Ultimately, how and when to dose during exercise rests on the individual.

“Both cannabis and movement are extremely personal journeys,” emphasized Morgan. “Finding the right balance may take a try or two, but I promise it is worth it to find what works best for you.”

High street cannabis products and the complexity of cannabis law