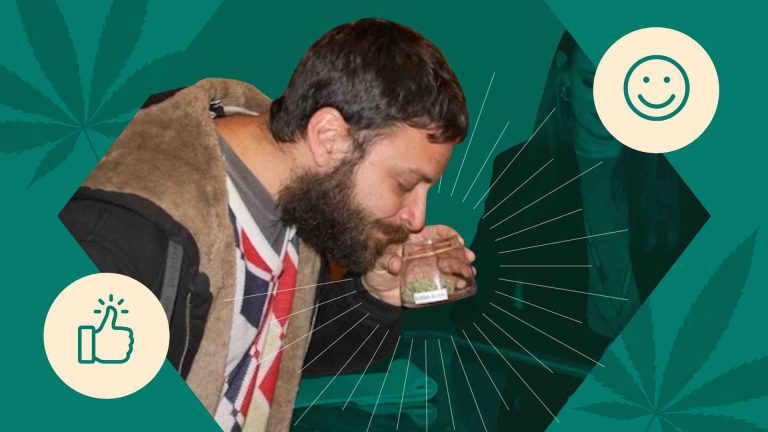 It’s hard to believe more than four years have passed since I wrote an article for Leafly titled If New Jersey Legalizes Weed Do I Have to Move Back Home?

At the time, Phil Murphy was poised to win his first term as governor, and his stump speech included a promise to sign legalization into law in the first 100 days of his administration.

Famously, that didn’t happen. But not for a lack of trying.

1,022 days into Murphy’s governorship, he put the issue before the state’s voters, who approved legalization 67-33%. Then it took another 112 days to get the law on the books.

That was more than a year ago.

But now—at long last—New Jersey’s first legal recreational cannabis sales will happen on Thursday morning. And I’ll be there for it.

A lifelong fear of getting busted

I’ve been writing about cannabis for twenty years. I was fortunate enough to be in Colorado in 2014 for America’s first ever state-regulated adult use sale. I was eighth in line, and wrote an article called “I Just Bought Legal Weed” that thoroughly documented one of the highlights of my career as a journalist—and truly, my time on planet Earth.

16 states have legalized since then, but nothing hits you like home.

As a young person coming of age in the Garden State, smoking weed helped relieve my anxiety while simultaneously giving me a whole new kind of anxiety: the fear of getting busted. From the very first time I ever got high (behind a bowling alley on Route 22), every single experience of buying or even just possessing weed in New Jersey included a tinge of fear.

Witness to the damage of the War on Drugs

My last known address in New Jersey was raided by the police over an amount of cannabis that is now legal to carry on your person anywhere in the state. An amount that any adult can, starting today, purchase at a store in that same state.

I was not home when the raid happened and wasn’t subsequently charged with any crimes. (I was arrested in New York City once for smoking a joint on the street, something that is also now perfectly legal).

At the time of the police raid, I’d been working as a cannabis reporter for about a decade. I’d written countless articles about people who had their lives torn apart for growing, smuggling, selling or simply possessing a relatively harmless, highly medicinal plant. Then I saw it happen in my own home, in my own home state.

That state—not coincidentally—is also home to some of the world’s largest pharmaceutical companies. Including one that sponsored my first Little League team.

Lives derailed over an ounce of weed

In the aftermath of the police raid, people I loved then and love now faced far greater legal repercussions over an ounce of illicit weed than every single Big Pharma executive in New Jersey who was directly or indirectly involved in a multi-billion-dollar conspiracy to get people hooked on addictive, deadly opioids.

Large fines, police seizure of cash and personal possessions, threats of years in prison, legal costs, court visits, probation, stigmatization, sleepless nights and the psychological damage of having armed agents of the state secretly surveil you and put you in handcuffs while threatening deadly force for failure to comply—that all leaves deep emotional and financial scars.

Millions of my fellow New Jerseyans suffered the same fate. Some remain imprisoned to this day for cannabis crimes.

Which begs the question: How do you ask a person to be the last person to sit in prison for a mistake?

Cops racking up arrests until the bitter end

According to a 2017 ACLU report, New Jersey police kept their foot on the marijuana arrest accelerator pretty much until the moment legalization became law. The report found: “New Jersey is making more arrests for marijuana possession than ever in a manner that is more racially disparate than ever.“

The report estimated police agencies spent about $143 million annually on marijuana enforcement in NJ, not including lost tax revenue and other societal costs. Around 90% of arrests targeted consumers rather than dealers. In New Jersey, Black people were at least three times more likely to get busted for cannabis possession than white people, despite similar usage rates.

Leaving to live freely and without fear

I didn’t exactly leave New Jersey because of cannabis prohibition, but if weed had been legal back then I might have stayed. I’m a third-generation resident, and most of my family still lives there. I love eating a Taylor Ham-egg-and-cheese sandwich down the shore as much as anybody.

I had hoped to be on hand for the first day of legal sales, but the state’s ever-changing timeline for when that would happen made the planning impractical. Also, I’ve got to admit, eight years after Colorado stores opened, and more than a decade since I got my first medical cannabis card in California, there’s a bit of anticlimax setting in. Prohibition, after all, was the aberration—not legalization.

After the first couple of times, buying weed in a store quickly feels, well, to borrow a phrase from the National Organization for the Reform of Marijuana Laws—pretty normal. Other than the sticker shock of paying tax on it.

So instead of flying clear across the country on a moment’s notice, allow me to offer a bit of shopping advice for my many 420-friendly friends in the Garden State. For starters, don’t let your late arrival to the party diminish the historic nature of the occasion. Also, try to source from dispensaries and brands that represent the legacy market, the equity market, and local ownership.

Now tell me, where would you rather get a slice—Domino’s or Santillo’s (since 1918)? And how many Papa John’s franchises do you think made this prestigious list?

The invisible progress of arrests not made

Decriminalizing cannabis is an incredibly impactful societal change that’s also hard to put your finger on. Nobody thinks to themselves, “Wow, I would have gotten arrested for weed today except we changed the law.” And yet, as recently as 2017, New Jersey police still arrested 98 people every day on weed charges.

The end of cannabis arrests is a huge win for social and racial justice, but buying cannabis in a store is what the public associates with legalization. That’s precisely because you can see it happening.

When I was in Denver for the first day of legal sales, dozens of news trucks lined the street outside the dispensary, beaming footage all over the world. Seeing that, I turned to my shopping companion and stole a line from Apocalypse Now:

Someday, this war is gonna end.

I knew that a century of all-out government and media propaganda—employed by men like Harry J. Anslinger and William Randolph Hearst to prop up their racist and oppressive War on Marijuana—would melt away when faced with news footage of people peaceably lining up to buy the Devil’s Lettuce, right out in the open, and then going happily on with their lives.

In too many places in America and around the world, we continue to face arrest and imprisonment for doing the same exact thing. And so, the fight goes on. But as New Jersey shows us today, the momentum is surely on our side.

Cannabis can’t cure this, but…

Writing about cannabis for as long as I have, and speaking about it often as I have at events and on my podcast, one tends to invent a few stock phrases. Perhaps my favorite:

Cannabis is not the cure for being an asshole, but it’s a good place to start.

I’m always sure to make it clear that I’m referring to myself primarily. As a young person, I had a major chip on my shoulder. I felt like New Jersey was irredeemably full of assholes, without ever realizing I was an asshole too.

Here’s how I put it in my book How to Smoke Pot (Properly):

I first tried cannabis as an angry young man who saw a lot of injustice in the world, and not much hope for fixing it…

In the end, weed not only helped me learn to stop worrying and love New Jersey (and even to become less of an asshole). Weed also proved me wrong. Because this week the reeking injustice of cannabis prohibition in my home state finally comes to an end.