Are psychedelics legal in Canada? 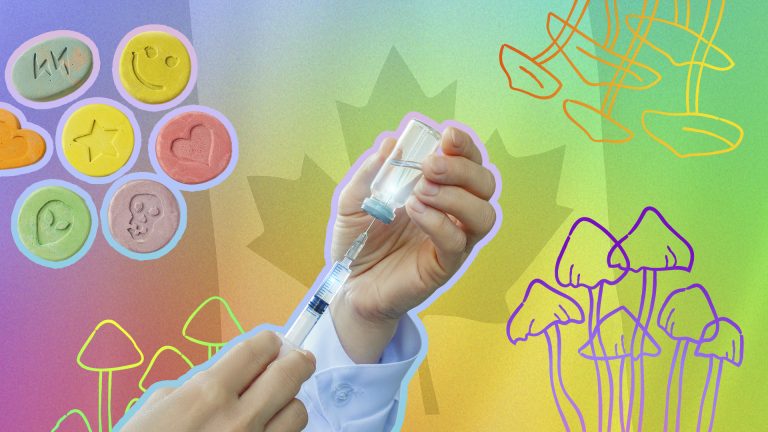 In Canada, psychedelics encompass a range of restricted plants, fungi, and chemicals that are federally regulated as controlled substances by the Controlled Drugs and Substances Act (CDSA). Under the CDSA, each psychedelic is organized into schedules based on perceived harm, on a scale of one to nine, with Schedule I being designated the most harmful for Canadians.

But not all plants containing psychedelics are illegal. And some Schedule I psychedelics are available in fancy private clinics (for a handsome fee), while others in Schedule III have just opened up to qualifying patients under a physician’s care.

A groundswell of Canadian psychedelic companies, bolstered by over $289 million in venture capital, is currently permitted to manufacture psilocin, psilocybin, mescaline, DMT and MDMA with a “dealer’s licence”.

Today, these companies can only sell these substances for research purposes to a small, but growing number of Health Canada-approved studies. So, are psychedelics legal in Canada? Not really. Then again, it depends.

Which psychedelics are legal in Canada?

If you were to roam the streets of Canada in search of psychedelics, these would be your legal, or decriminalized, options:

This fast-acting anesthetic isn’t legal at a party but ketamine has been legal to medical professionals in the U.S. and Canada for over 50 years. There are now multiple private clinics offering ketamine-assisted therapy across Canada with registered medical practitioners.

To qualify as a patient, most clinics require you to have treatment-resistant depression, anxiety or other mental health issues, along with a doctor’s referral. The cost of treatment is in the thousands, but there is at least one publicly funded hospital program that will treat patients for free.

The cactus that manufactures the psychedelic substance mescaline is perfectly legal to grow, sell, and consume in Canada—just don’t isolate and extract the mescaline, which is illegal.

This surprising loophole stems from peyote’s use in ceremonies of the Native American Church, a U.S.-based organization with chapters in Canada.

The Canadian government specifically exempts peyote from the CDSA because of its ceremonial use. The San Pedro cactus, which also contains mescaline, is legal for ornamental purposes.

While possession of ibogaine is technically legal, its sale and distribution are not. This psychoactive compound extracted from the root bark of Tabernanthe iboga, a Central West African shrub, is associated with adverse and even fatal effects. Health Canada has advised the public not to consume ibogaine.

While you still can’t legally buy MDMA, starting in January 2023, personal possession of 2.5 grams or less will be temporarily decriminalized in British Columbia as part of a pilot public health program along with a handful of other Schedule I substances. Certain rules still apply, like avoiding schools and airports. This is part of a sweeping Section 56 exemption (see below) on behalf of the province.

Any psychedelic with a Section 56 exemption

If your doctor is participating in research, or you volunteer yourself into a clinical trial, any psychedelic regulated by the CDSA can be approved for use with a Section 56 exemption.

As long as the psychedelic is believed necessary for medical or scientific purposes, or in the public interest, you could find yourself with legally-obtained psilocybin, MDMA, LSD, etc.—as long as you don’t mind being a research subject.

Alternatively, you could join a church: When one Montreal-based church gained a Section 56 exemption under the public interest criteria to serve tea made of ayahuasca, the plant that contains DMT, many more similar churches followed suit across Canada.

Any psychedelic approved through the Special Access Program (SAP)

Prior to January 2022, psychedelics such as psilocybin and MDMA were not permitted through the SAP, which allows doctors to petition for drugs not available for sale. But the 2022 amendment opened the SAP to include applications for psychedelic therapies. Access is only considered for serious or life-threatening conditions where conventional therapies are unsuitable.

What is not legal in Canada?

If you’re still roaming the streets of Canada without a medical referral, legal exemption, church affiliation, or personal cactus collection, most psychedelics could get you in trouble with the law.

The Controlled Drugs and Substances Act (CDSA) prohibits the sale or possession of:

The City of Toronto has also applied for Section 56 exemptions to decriminalize small amounts of illegal substances for personal possession within city limits. Approval by Health Canada is pending.

Why am I able to buy magic mushroom gummies?

While psychedelics are illegal on a federal level, provinces, territories and cities have some control over local law enforcement. They could choose to prioritize regulation of psychedelic storefronts and online shops—or not—similar to the state of recreational cannabis leading up to 2018. To be clear, these shroom shops are not legal.

As with any unregulated product that has not undergone checks and balances enforced by Health Canada, there may be inconsistencies in ingredients, dosage, and even food-grade materials from illegal shops. And, you could get arrested for possession.

What about First Nation territories?

Under Inherent Jurisdiction, Indigenous communities can assert regulation of controlled substances within their own territories. And while this may be true, there are currently ongoing legal disputes over the sale and distribution of legal cannabis on First Nation lands.

Termed a “grey zone” for the confusing legal status of cannabis growers and storefronts that aren’t registered with the province or territory, one can speculate the regulation of psychedelics will become a similar issue of dispute between governments and First Nation communities.

The Canadian Charter of Rights and Freedoms—a psychedelic loophole?

There is no such thing as the “Canadian Constitution.” Instead, there is the Canadian Charter of Rights and Freedoms. Under the federal Charter is the right to vote, access to abortion, and possibly access medical psychedelics under Section 7: the right to life, liberty, and security of the person.

Section 7 is the reason medical cannabis was legalized in Canada back in 2001, whereby the court found a Section 56 exemption did not provide sufficient access to cannabis for a patient with epilepsy who used cannabis to control his seizures.

This precedent suggests that if Health Canada arbitrarily denies a Section 56 exemption request for psychedelic therapy, it could constitute a Charter violation.

TheraPsil, a non-profit advocacy group, has launched a lawsuit against the Government of Canada and the Minister of Health. On behalf of seven patients and one healthcare practitioner, TheraPsil claims that by denying patients access to psilocybin-assisted therapy, the government is violating Section 7 of the federal Charter.

If TheraPsil wins the case, not only will the plaintiffs receive psilocybin without the need for lengthy Section 56 or SAP exemptions, it would likely force the government to come up with a legal framework for psilocybin, akin to the current Cannabis Act.

Where does Canada stand with psychedelics research?

Health officials are hesitant to risk public safety without a scientific stamp of approval through randomized, double-blind, controlled human trials. While there are a number of trials underway, they are moving very slowly.

The average drug trial can take anywhere between five to 10 years before it goes from pre-clinical trials (in the lab with cells, molecules, or animals) to passing a phase three human trial. Only after phase three can researchers apply for a drug’s approval by Health Canada.

A further complication in psychedelic research is the question of placebo: Most research participants will know if they have not been given a hallucinogenic substance. This makes a double-blind trial almost impossible, and subsequent approvals by Health Canada difficult to obtain.

Some workarounds include blocking the psychedelic effect for participants, such as a new study undertaken by Toronto’s Centre for Addiction and Mental Health (CAMH). This study is the first in Canada to receive a federal grant for researching the effects of psilocybin on depression. It’s expected to take three years to complete.

That being said, one creative study done by researchers at McGill University gave all 33 participants psychedelic placebos, then participants spent four hours in a room that had been set up to resemble a psychedelic party with paintings, coloured lights and a DJ, along with paid actors, ten research assistants in white lab coats, psychiatrists, and a security guard. Sixty-one percent of participants said they felt the effects.

In spite of the long research road ahead, and countless bureaucratic roadblocks, many Canadian universities have active psychedelic research departments. There are also private research clinics, such as the Canadian Rapid Treatment Centre of Excellence with multiple locations nationwide, and the Nikean Psychedelic Psychotherapy Research Centre in Toronto.

A handful of therapy clinics across the country also conduct research under Section 56—you pay for a psychotherapy session, consent to research, and the psychedelics are free. Every bit of data helps in the eyes of Health Canada.

Who’s cashing in on psychedelics?

There are a handful of psychedelic exchange-traded funds (ETFs) on the market today, and even more publicly traded stocks in psychedelic businesses that any Canadian over the age of majority can invest in.

However, a big payoff hinges on if—and when—fully legal medical and/or recreational psychedelics will be available in Canada.

And who’s driving psychedelic capitalism? Big-name investors in psychedelics include Peter Thiel, the Facebook and PayPal investor, and David Bronner, CEO of Dr. Bronner’s Magic Soaps. (Both of these men were also early cannabis investors.) Canada’s own Kevin O’Leary of Shark Tank fame has also thrown his hat into the psychedelic ring, with lots to say about the nascent industry and its medical (read: financial) potential.

Then there are the community ethics of all this potential profitability. As many psychedelics are derived from nature—not to mention sacred to human cultures for millennia—what right does any person have to profit off their mass production, especially if said psychedelics are not part of that person’s traditional culture? And what are the ramifications of placing a patent on the very compounds that give natural psychedelics their essence?

Some grass-roots organizations are actively monitoring these social issues and raising the question of psychedelic justice and reciprocity with scientists, politicians, investors and business owners.

What’s next for psychedelics in Canada?

Right now, all eyes are on the lawsuit between Therapsil and the Government of Canada, although it likely won’t make it to court for another year at least.

Considering many of the plaintiffs in the case are palliative care patients, timing is especially sensitive. However, the point of the lawsuit is to question how regulators can speed up access to psilocybin. Should the trial drag on and some plaintiffs pass away, it only strengthens the case for a legal framework for medical psilocybin.

TheraPsil estimates that it has 900 palliative care patients currently waiting for individual exemptions by Health Canada to access psilocybin. TheraPsil is supported through grants and individual donations. David Bronner is one of these donors, as well as Canadian venture capitalist Sanjay Singhal through his Nikean Foundation.

Colleen Fisher Tully is a freelance writer and editor with recent work in Clean Eating, Today’s Parent, The Walrus and Local Love. She posts random thoughts on Twitter @colleenftully