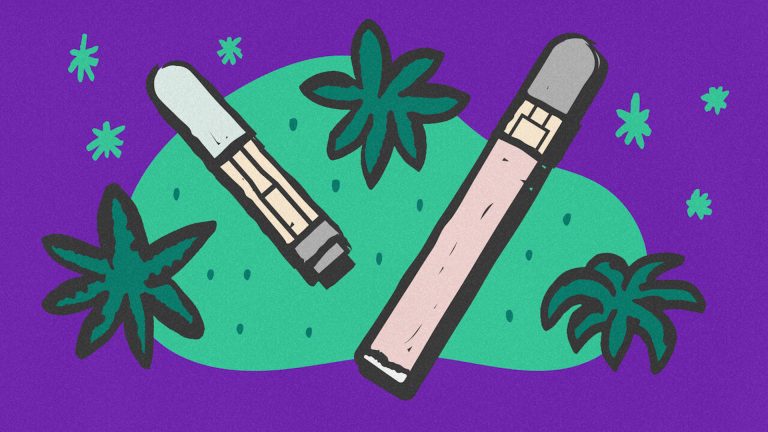 Now through 4/20 and into summer, THC carts have never been cleaner, cheaper, stronger, more diverse, or more legal. More than a dozen states have adult-use sales going, and disposable THC vape cartridges are the second most popular category after flower.

Battery-powered devices that heat but do not burn cannabis oil have grown up into a multi-billion dollar, highly regulated industry.

Carts can be worth more than gold or platinum at the top end, and far cheaper than flower at the bottom. It’s a Cambrian explosion of cart species—and some of the best stuff is single-source farmed, extracted, and filled in-house, like at Archive PDX. Carts are so versatile and innocuous that you can forget you have one on you, especially if they are doing their job. Don’t forget to explore the best that carts can offer this April. Here are some of America’s coolest THC carts putting up clouds.

The leading vape brand Pax and the Era pod system brings solventless extracts to the masses this 4/20 with their new Live Rosin line of pods. Stay away, butane. Live rosin comes from heat-pressed ice water hash. Growers harvest the plant material and freeze it fresh—saving all those tasty terps and effects for you. The Lemon Cake? Fire. The Tahoe Rose? Fancy. The Jack Herer? Basic but we’ll allow it. Live rosin is incredibly tricky to get into a pod, which is why the tech has taken a minute. Era Live Rosin pods come in 11 strains, usually .5g, but also now 1-gram with a ceramic atomizer for tastier hits. Strains available for delivery right now in Cali: Wifi Mintz, Tahoe Rose, Blueberry OG, Blue Dream, Pineapple Express, Jack Herer, California Orange, Mochi Cookies, Guava Gelato, Lemon Cake, and Lavender Haze (CBD).

One of the biggest names in terpene-forward extractions, Blue River, hits big in California this April with its lineup of rosin sauce carts. Rosin sauce is solventless, and very high terpene, and really tough to get working right in a cart. It’s strain-specific, not a blend, and no one’s ever exposing the flower to butane, nor is anyone adding in any extra terpenes from weed or any other plant. Blue River rosin sauce carts come in GMO, Fat Lenny rosin sauce cart, and Melon Sweat. There’s also jelly sauce—check the Honey Sourdough jelly sauce cart, and Cherry Voltron Jelly Sauce cart. Hats off, as always to Blue River.

See also: Hash and Flowers Live Rosin pods—Emerald Cup 2022 solventless judge and Leafly freelancer Jimi Devine introduced Leafly Buzz readers to this high-end indie hash brand in 2021 ‘Hash and Flowers’. Now Hash & Flowers’ top-tier live rosin comes in pod form. The team tried out 20 pod systems to land on one that rips from the first draw, while keeping it terpy and low-temp. This is the fancy rosin pod that’ll blow minds at the sesh. If you spot them, be sure to grab the Honey Banana, GMO, or Ice Cream Cake.

For veteran smokers, 420’s the time to seek out new frontiers of cannabis awesomeness. The hash brand 710 Labs is worth a splurge this April. Mostly they make top-tier dabs, but they can sometimes be bothered to fill carts with their live resin. Ever experienced their custom pod system? Each rip is like a dab in your hand, so be prepared for peak effects from the tireless artisans at 710 Labs. I’d get a Chocolate Oranges #25 from High Times delivery in LA (needs the battery), or the Sundae Driver x Pielatti ‘Persy Pod’ tier II. Why is it more expensive than the actual metal, platinum? Because a lot of skilled labor and time results in very little final product. 710 Labs’ tiering system explains why the hash can run $87 per half-gram. You’re shocked, but shops like Purple Star in San Francisco stay stocked for extremely discerning hash heads: check the Mendo Purps + Zkittlez #12 + Papaya (Tier 1) Persy Pod .5g; Gak Smoovie #5 (Tier 1) Persy Pod .5g; Marshmallow OG (Tier 1) Live Resin Pod .5g; and Jet Fuel Odder Popz #27 (Tier 3) Persy Pod .5g. (Buy a battery, too). Take care of your extra-fine 710 Labs hash pod —store it cold, hit it at room temperature, and never leave it in a hot car.

Los Angeles’ elite indoor flower brand comes over to the cart side with a lineup of flavors and their own battery base. Now you can get Brett Feldman’s ‘flavors on flavors on flavors’ in the more portable cart format, instead of the top-shelf flowers. See the Lemon OZK, Strawberry Bliss (found at places like Sweetflower LA); or the OZ Kush at City Compassionate Caregivers. It’s a 100 percent live resin oil cartridge, made with real cannabis terpenes and zero additives, with a glass tank, and ceramic atomizer. Wonderbrett carts work with standard ‘510 thread’ batteries, but Brett recommends the custom “Drip” rechargeable battery for the California vape market. The battery uses one-button control, with three adjustable voltage settings: 3.0V, 3.3V, and 3.6V. Here are the stores stocking Wonderbrett carts this month. SoCal: Catalyst, March & Ash, Cannabist, Medmen, Culture Cannabis Club, and Libra. Central CA: Valley Pure; NorCal: Harborside, Mainstage, South Sacramento Care Center, and Nug.

It’s uncanny. This dessert-sweet cultivar tastes precisely like the banana candies purchased by depositing a quarter in the machine and twisting the dial. For those who indiscriminately ate the mixed handful of candies (you monsters) Honey Bananas might be too one-note. But if you did eat the individual banana candies you are going to love that nostalgic feeling and mood-elevating effect. Cultivated and washed in-house by Archive PDX, the first batch of single-source Honey Bananas rosin from Archive flew off the shelf, so we were pleasantly surprised to see it return in a 510 thread cartridge. The form factor sacrifices very little, after dialing in the temperature we saw expansive clouds that delivered big banana candy-flavored hits.

Cultivated by Indigo Gardens, extracted by Willamette Valley Alchemy—we’ve got to hand it to Indigo Gardens for producing some of the most true-to-the-fruit pineapple flavors we’ve experienced in a cartridge. Bright tropical flavors are on the tip of the tongue after every temperature-controlled toke of Piña on the Pax Era. The half-gram carts click neatly into place and deliver lung-busting hits at first draw. W.V.A. does what they do best, extracting a light golden oil from the fresh frozen material, preserving the aroma of freshly harvested cannabis. With a nearly perfect 1:1 ratio of THC to CBD, the Piña delivers an effect that starts subtle but builds to a mind-relieving, body relaxing crescendo. Forget the spring chill, pack this one along, set up a hammock, and catch a tropical breeze.

Washington fire flower grower Freddy’s Fuego also extracts their top-shelf terps and squeezes them into distillate carts. One standout is the Freddy’s Fuego Gucci Fruit cart. A hybrid of Grim Bastard OG x Forbidden Fruit—we love that gas with citrus for heavy yet functional daytime effects. See also Freddy’s Fuego staples Mimosa, classic Super Lemon Haze, Zkittlez, and Cereal Milk. Carts are a very affordable way to stay lifted—they work out to roughly 870mg of THC for $40, or 22mg per $1 at the low end. For the highest-end rosins, it’s 8mg THC per $1, which is still not a bad value for a mood change.

Beboe founder Clement Kwan ran a secret grow while getting his undergrad degree at UC Berkeley. That kind of classy moxie shows in Beboe’s bespoke Inspired pen, found in Illinois, and California. It’s sleek and rose-gold with detailing, and the stuff inside passes muster. Unlike some random ‘fart cart’ from a random street seller—you’ll never find dubious cutting agents or straight poisons like vitamin E acetate in a tested Beboe pen. The 500mg formulation hits citrusy and sparkly yet functional, with light and bright effects for cocktail hour. It’s 65% THC potency with 12% CBG and 7% CBD to keep you tethered. Gentle, euphoric, and clear-headed—Inspired is Beboe’s rose-tinted glasses. See also: Beboe’s Downtime pen.

Well-reviewed and on-trend carts in Arizona

Carts start at a modest $18 per 300mg disposable in Nevada (Wind Wedding Cake), or $20 for a full gram of Purple Punch distillate from Select. The top of the line is the Khalifa Kush from the Khalifa Kush brand, The Clear Starberry half-gram cart, or the super-terpy Chewbacca Liquid Cured from Goldsmith—like a joint in a vape.

It’s 2022, so you can shop hundreds of Denver’s carts from a single Leafly shopping page. You’ll see that oil carts start at a rock-bottom $14 per gram. The fun stuff is at the top end like The Clear Elite Orange Cream 1g; The Lab Bubba Kush Live Resin Pax pod; or the Green Dot Labs Kitchen Sink live resin cart—absolutely no added cutting agents, distillate, CO2 oil, or fake terps of any kind.

Comment below to nominate a great vape for future Leafly News coverage—and keep it classy.