8 vibey video games for a stoned night in 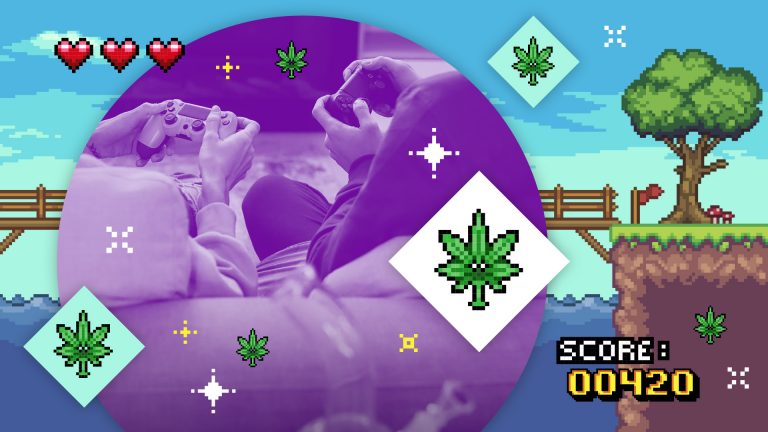 When you want a chill night in with a good strain, there’s nothing like a low-key video game to kick back and have a good time. It goes without saying that choosing the right game (and strain!) is essential. You’ll want to pick a strain with relaxing, euphoric, or happy effects that will stimulate your creativity without worrying about first-person shooter reflexes.

You can do just about anything in a video game if you choose the right one—but for a night in, the stakes should be low, the scenery should be vibrant, and where you end up should be all up to you.

Below, we’ve curated eight fantastic games with relaxed, feel-good vibes that suit a stoned gaming sesh. Settle down, pack a bowl, and leave the stress of the day-to-day behind as you play alone or with those close to you.

Stardew Valley is arguably one of the best, if not the best, farm-life sim games out there. Don’t be put off by the classic 8-bit style look, this charming game contains a surprising amount of depth and a well-rounded experience that leaves players hooked.

Move away from your fast-paced, dreary office job and immerse yourself in your grandfather’s old farm, bringing it back to life with farming, animal husbandry, mining, fishing, collecting, befriending, and romancing villagers— and even some light combat. A truly immersive and relaxing game, it’s a perfect choice for some stoned me-time.

For the intergalactic voyager comes this colorful and creative game. The Astroneer graphics alone will have you mesmerized as you explore distant, glittery planets bursting with vibrant colors.

Enjoy a joint as you tunnel into the Earth to find crystals in caves or rocket off to space to hop from world to world. Play the open world and take your time exploring, or check out creative mode to go wild. The unrestrained and fascinating gameplay will have you chilled out and tuned in.

If you’re looking for the chillest of chill, then PowerWash Simulator may be the game for you. It’s exactly what it sounds like—you’re in charge of a power washing business, and it’s your job to go out there and clean the grime off of vehicles, playgrounds, and even haunted houses.

Watch the scenery come to life again as you meticulously clean it all up and zone out while smoking your favorite bong. You’ll feel not only relaxed but also accomplished.

Call of the Sea

If you prefer strains and games that get your cerebral gears turning, Call of the Sea may be right for you. This story-based puzzle game follows detective Nora as she travels to an island in the South Pacific to uncover the mystery of her husband’s disappearance.

Nora soon realizes she’s dreamed of this island and begins to wonder if they were dreams at all as you work to solve the riddles of the strange location. Choose a focused strain and get cozy as you explore hidden mysteries and get lost in the story.

Donut County is an amusing game easily completed in a single evening and played again for its charming plot and clever gameplay. Your county has been experiencing mysterious holes popping up and swallowing huge swathes of towns.

You’re investigating, but also simultaneously playing as the holes themselves—swallowing up houses, roads, and animal villagers. Don’t worry. The story is light-hearted and humorous and has a happy ending for all involved. It’s a cheery, worthwhile independent game that will have you smiling while smoking a happy strain in your favorite gaming spot.

This early-access sequel to the original Slime Rancher is a charming and aesthetically-pleasing game that has you play as main character Beatrix LeBeau as she travels to a new island to continue her path as a slime rancher. For those unfamiliar, slimes are bouncy, smiley, little rotund alien creatures.

Capture and corral the creatures to help build your world, and create gadgets while feeding and taking care of your collection of slimes. In the process, enjoy the bright, beautiful graphics and explore the world at your leisure, while following the silly storyline that, combined with your favorite strain, will have you chilled out in no time.

Dreamlight Valley is in early-access release, which means the game is still working out bugs and adding content, but the reviews have been sparkling. This farm-life sim is like many others of its genre with a twist that’s sure to get the nostalgia going—Disney.

Explore the gorgeous world of Dreamlight Valley as the mysterious leader, ushering your favorite Disney heroes and villains through the game. Befriend characters, explore the mysteries, farm, mine, fish, dig, build and even design clothing. The game has everything you need to let your own creativity loose while enjoying a creativity-enhancing strain.

Who hasn’t played The Sims at some point? Maybe you haven’t played since the first Sims was released all the way back in 2000, or maybe you’re a lifelong fan of the franchise. Whatever the case, the latest iteration of the game, The Sims 4, offers the gameplay versatility that makes it a great choice for a chilled night in.

Let your creativity run free in Create-A-Sim or Build Mode by creating a perfectly styled sim or building your dream house. When you’re done, watch your Sim create floral arrangements. Or make them play The Sims themselves for some meta gameplay that’ll have you stoned and contemplating the mysteries of life.

Rae Lland is a freelance writer, journalist, and former editor for Weedist and The Leaf Online. With a focus on culture, music, health, and wellness, in addition to her work for Leafly, she has also been featured in numerous online cannabis publications as well as print editions of Cannabis Now Magazine. Follow her on Instagram @rae.lland