5 reasons why Jack Herer is the godfather of modern cannabis 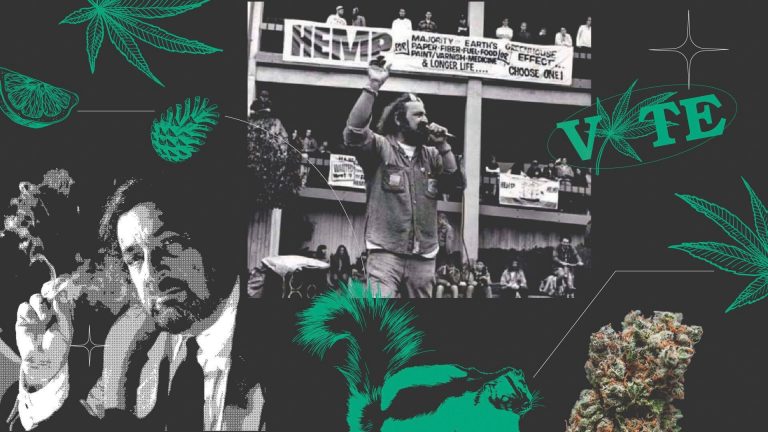 
If you’re smoking legal weed this Father’s Day, you owe this activist an honorary toke.

Before you light up your Father’s Day stash, remember to spark one for Jack Herer, aka the godfather of modern cannabis.

A good godfather isn’t always there. But he’s right on time when you need him. And for much of the prohibition era, Jack Herer led the cannabis community forward with passion and brilliance.

At a time when most consumed in the closet, Herer’s example became a guiding light for the cannabis community. Even for those who didn’t agree with his bombastic vibe.

“You’ve got to be out of your mind not to smoke dope!” Herer told a crowd in 2009 at one of his final public appearances.

Although he died in April, 2010 at age 70, Herer’s legacy lives on through writings, recorded speeches, and the world-famous Jack Herer strain. Bred for medical patients of Dutch pharmacies since the 1990s, Jack’s honorary strain still measures up to his reputation for trailblazing ideas and inspiring energy.

1. He paid his dues to the dank

Jack Herer’s career in cannabis goes back to his days as a pioneer of the glass pipe industry. He opened his first head shop in 1973 at 34 and began documenting everything he could about the cannabis plant. His observations would later bloom into a world-famous book, The Emperor Wears No Clothes. Jack began writing The Emperor while he was in prison for protesting the Ronald Regan administration.

The non-fiction book was a counter-culture manifesto that raised questions about the validity of American propaganda, and particularly the War on Drugs.

The text offered $100,000 to anyone who could disprove its claims about cannabis. Claims included: Hemp plants are the world’s most efficient solar power source, and hemp is a sustainable solution for world hunger.

The book was published 12 times over the next 25 years, with the final edition hitting presses in 2010, the same year that Jack passed at 70 from complications following a heart attack.

2. He kept the family tight

Keeping the cannabis community united is no small task. You have growers, sellers, smokers, dabbers and munchers who all feel unique ownership of the plant. But Herer’s work as director of the organization Helping End Marijuana Prohibition (HEMP) made unity a priority.

With legalization bringing a flood of capital and competition to the legal weed market, all participants should revisit the principles that Jack preached on the path to legalization. Even with some of his loudest critiques coming from activists at NORML (National Organization for the Reform of Marijuana Laws), Jack saved his smoke for those supporting prohibition.

Some contemporaries wanted Jack to be more grown-up, and mainstream. They even challenged his sweeping declarations that hemp could save the world. Still, in 2002, NORML reversed its long-held skepticism by honoring Herer with a lifetime achievement award.

3. He stayed close to the plant

In his lifetime, Herer got his hands into every cannabis business category. The experience he gained selling pipes in the 70s, writing books in the 80s and lobbying hard for legalization in the 90s gave him a foundation of substance and complemented his natural leadership skills. Jack’s charming presence and clear voice helped him reach people with ease. But he didn’t put himself before the plant. In fact, he rarely had time to indulge in his ego because he was so busy getting baked.

“No one has ever died from marijuana that wasn’t shot by a cop,” Jack would often joke. The line used to scare his fourth wife, Jeanie, who tracked Jack down in the late 90s after reading his famous book and having a revelation. She found him stoned, laying under his famous vendor table on Venice Beach, and couldn’t believe this was the author of the book that had changed her life.

4. He helped blaze the legal trail

Back in 1972, Herer joined California lawyer Leo Paoli to put Proposition 19 onto California ballots. It failed to pass with 33% approval, but the votes showed Jack and others that Americans were starting to see through the propaganda of the Drug War.

Herer also created the Great American Standard System (GRASS) to educate adults about hemp with cartoons and witty copywriting. And along with his friend, Captain Ed Adair, Jack swore an oath to never rest until the plant was legal.

Jack was pefectly fine with playing the long game. He pushed failed ballot measures year after year with a smile, because he loved the democratic process and enjoyed the incremental progress his work pushed forward.

Everyone enjoying decriminalized or licensed cannabis today owes an honorary puff to Jack for his political foresight and patience.

The godfather’s name and influence will live on for generations thanks in part to the Jack Herer Cup competition, which is held in Amsterdam, Colombia, Las Vegas, Oklahoma City, and Thailand each year.

But why do premium Jack Herer cultivars remain among the most popular sativa-dominant strains on the planet? Well, just a few citrusy tokes of Jack’s namesake flower will flood your brain with fresh ideas and the rush of energy you need to execute them. So this Father’s Day, light up some JH and celebrate the godfather’s legendary influence on the world of modern cannabis.

For more on Jack, check out Tom Zoellner’s original feature profile of Herer from 2017, and listen to Leafly’s The Roll Up podcast episode dedicated to pot’s godfather.

Also, the updated 2020 Kindle edition of The Emperor Wears No Clothes, edited and annotated by Dan Herer, is available here.