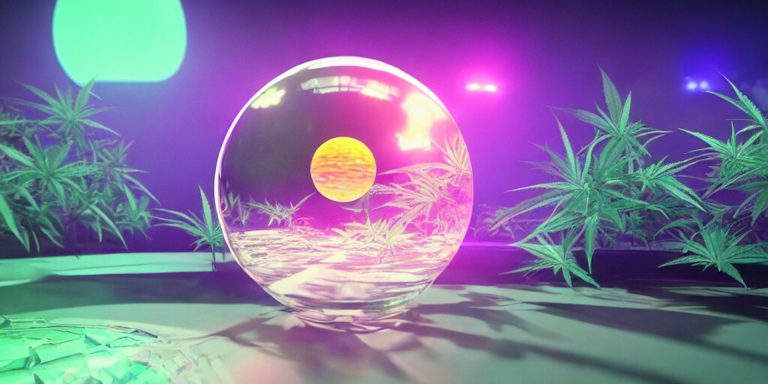 Call us Pot-stradamus—last year, we looked into our crystal bongs and correctly predicted the future of weed in America with 74% accuracy! Is it second sight? No. Bruce and I have occupied the weed news trenches for a combined 25-ish years. Trends follow clear trajectories: like, for example, the spread of legalization from West to East.

Below, we outline our predictions for the next stages of federal and state legalization, hot new strains, mushrooms, and CBD. We got 40 weed prognostications strongly likely to come true.*

It’s going to be the year of Rainbow Sherbert 11 and crosses, which is third and fourth-generation Zkittlez work. The Rootbeer strain is going to take off. Same with Trop Cherry and Super Boof. GastroPop, as well as strains bred from the Y line are going to pop.

The seed-selling industry will go even crazier, now that the DEA said anything under 0.3% THC is just hemp; like birdseed. Everyone is gonna have a seed brand. The cannabis genetics golden era brightens further.

We’re going to get proof that some terpenes—aroma molecules in weed—create outsized smell and effects relative to their amounts. We’ll also learn about previously unclassified or unnamed molecules contributing to aroma and effect.

Solventless “Live rosin” is about to have an even bigger year.

The weirdest, wildest weed stories of 2022

We anticipate hundreds of new dispensaries will open across dozens of new cities. Delivery services will spread.

Las Vegas will leap to the forefront of the cannabis consumption lounge trend. New state-licensed lounges will open in Sin City, many with the over-the-top design and luxury amenities we’ve come to expect from America’s adult playground.

At least one of the new lounges will partner with a rideshare company to return patrons safely home (or, let’s be honest, to their hotels on the Strip).

How long do magic mushrooms stay in your system?

New cities will legalize/decriminalize psychedelics. Other cities/legislatures will stiffen penalties for psychedelics.

Ketamine therapy will continue to go more mainstream and begin to jump the shark.

CBD, delta-8 and beyond

New studies will find some unhealthy compounds and effects in novel cannabinoid products like THC-O.

Pot prices will not soften in Illinois. A government-throttled legal supply will not meet demand. Pot prices will continue to fall in Michigan. Supply appears to exceed demand there.

The world’s biggest legal cannabis market, Los Angeles, will remain stalled with no meaningful increase in brick-and-mortar outlets, and more equity lawsuits. California will not bring its illicit market under control. As a result, California prices will remain low.

More aggrieved parties like Variscite NY One, Inc. will challenge equity programs in court. The federal lawsuit that’s currently holding up dozens of equity licenses in New York may set a chilling precedent.

New cases of lung injuries from tainted THC vape cartridges may come to light, most likely a limited EVALI outbreak in a prohibition state. The hemp-derived THC loophole has opened up major sales and marketing opportunities for vape cartridge manufacturers, without any lab testing safeguards in place for consumers.

Congress will narrow the farm bill loophole that has allowed hemp-derived cannabinoids to flood prohibition states.

The FDA will keep warning CBD sellers about false claims, but final FDA rules on CBD will not come out in 2023.

2023 will see no cannabis legalization bills pass Congress. Republicans take over control of the House, which means Republican committee chairs have the power to block any cannabis reform bills they don’t like—even if the bills have enough floor votes to pass.

The House has passed the MORE Act (which would end federal cannabis prohibition) twice in the past two years—but that winning streak will end in 2023 as Democrats hand over control of the chamber to Republicans. MORE Act co-sponsors will still have enough floor votes for House passage, but the measure won’t make it to the floor in 2023 if prohibitionist Republican committee chairs don’t like it. Kevin McCarthy (R-CA), the presumptive new Speaker of the House, will also prevent legalization measures from moving forward during his term. House Dems will block Republican-led pot reforms. We expect that the Senate won’t even have to weigh in.

Cannabis gets nothing from Congress as session draws to a close

In the US Senate, Democrats will still control the agenda—and they still won’t have enough votes to pass a legalization bill. Stodgy Democrats like Sen. Jeanne Shaheen (D-NH) will balk at an issue they don’t understand and refuse to consider. Federal THC potency limits will be discussed but not enacted.

Sen. John Fetterman (D-PA) will be both an outspoken champion for legalization in the US Senate, and will also work behind the scenes, having personal conversations with his peers in the Senate, about the need for legalization.

Congress will pass a small, incremental cannabis bill. Not SAFE Banking or MORE, but another bill cutting red tape around research.

Re-scheduling will be reviewed by the US DOJ but not decided on. There will be hearings.

Two states will try to do interstate commerce, but the actual legal weight moving between borders will be zero. The headlines will be great, though.

More Dormant Commerce Clause suits will happen, but rulings will be narrow. They might sever some aspects of the Controlled Substances Act, but they won’t topple it.

Ohio will vote on legalization, but it won’t pass as consensus continues to build.

Minnesota state legislators will pass an adult-use legalization bill after months of wrangling over the details.

New Hampshire state legislators will make progress in gaining votes for a full adult-use legalization bill, but Gov. Chris Sununu (R) remains adamantly opposed to the idea. Without Sununu on board—and promising to veto any measure that passes—state legislators will improve on past bills, but will not make the effort to pass it this year. That’ll have to wait until Sununu moves on.

More states will enact expungement and/or resentencing for past marijuana offenses.

There will be more class action lawsuits around THC potency inflation—they’re very appetizing to lawyers who like to write press releases. But they won’t hold up in court because lab standards are so variable. California will enact nation-leading lab testing standards through regulatory review.

And that’s a wrap for our 2023 Cannabis Predictions. We wish you all the best of luck in the new year in all your endeavors.

*As always, these forward-looking statements depend on people and details involved, subject to the whims of the universe, including but not limited to: the Yellowstone Supervolcano, UFO landings, Antarctic ice sheet integrity, and the whims of novel coronaviruses.

Share. Facebook Twitter Pinterest LinkedIn Tumblr Email
Previous ArticleMembers of the public argue with Just Stop Oil protesters gluing themselves to the street
Next Article All of 2022’s Cannabis Cup winners and where to buy them