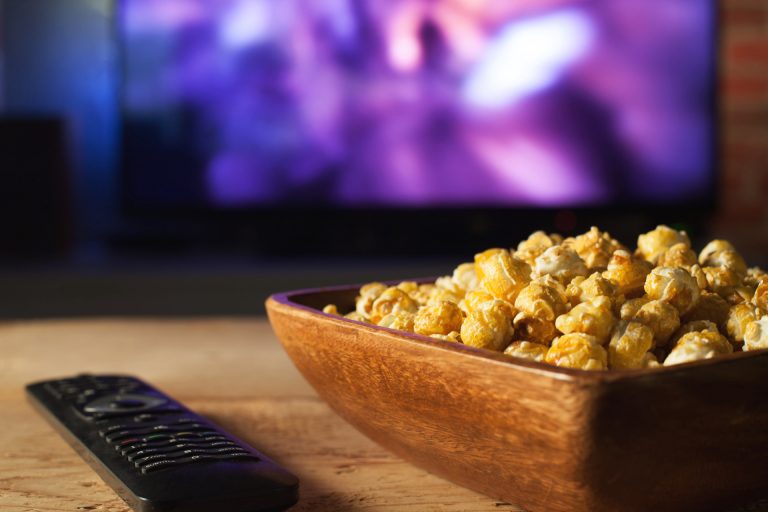 Check out the strains that go with these 2021 streaming sensations.

We’ve all had to make a lot of decisions this year. But pandemic or not, there are two decisions that remain critical to many of us: what to watch on TV and what weed to smoke.

Using Leafly’s best weed strain lists, we’ve put together the ultimate end-of-the-year guide for you to smoke and watch some of the very best television that 2021 has to offer, based on the genre and effects of the weed.

Normally, I wouldn’t recommend needing a box of tissues to watch comedy – but these shows will leave you in tears.

Let’s start off with a fan favorite that returned for its second season, South Side. Originally on Comedy Central, South Side has returned as an HBO Max Original. Written, directed, and starring nothing but Chicagoans, South Side is a gem waiting on you to find.

Our next comedy favorite is The Ms. Pat Show, exclusively streaming on BET+. Ms. Pat is a superstar in waiting, making her name as a comedian with an unforgettable personality. But I promise you, you’ve never seen a show quite like Ms. Pat’s show.

Not only has she brought back live studio audiences, but I’m also pretty sure this show could come with a parental advisory warning like your favorite 90s rap album.

Finally, we got The Upshaws on Netflix. Starring Kim Fields, Mike Epps, and Wanda Sykes, this star-studded cast does everything but disappoint. From start to finish The Shaws will have you LOLing in-between every toke, happy laughing.

The Falcon and the Winter Soldier

I don’t know of a franchise on a better run than the Marvel Cinematic Universe, but The Falcon and The Winter Soldier is a great story featuring Anthony Mackie as he navigates life after Captain America on Disney+. If you love superheroes, history, and action, you’ll love this show.

Our second recommendation propels us into the future and hops on a spaceship with Sonequa Martin-Green for Star Trek Discovery on Paramount+. Join Commander Michael Burnham as she navigates deep space with her crew, and she continues the legacy started by Nichelle Nichols.

Last, as a TV watcher, I can honestly say I was amazed watching AppleTV+’s Foundation. I don’t want to give away any plots of this show, because I want you to be floored just like I was. Lou Llobell, Leah Harvey, and Alfred Enoch do a wonderful job of bringing drama and action to the galaxy – delivering a true sense of adventure for sci-fi lovers.

These were the weirdest weed news stories of 2021

Drama is one of my favorite genres, so let’s start off with some heavy-hitters. Kevin Hart and Wesley Snipes star in the amazing limited-series True Story streaming on Netflix.

Based in Philadelphia, go on a heart-pounding ride of fame and deception with some of Hollywood’s biggest names. Kevin Hart shows some real range on this one and Snipes is as brilliant as he’s ever been.

Nobody likes a genre-bending crazy ride more than me. But Them on Amazon Prime Video is nothing short of a roller coaster ride.

Based during the Second Great Migration, Them follows a Black family moving from North Carolina to a White neighborhood in Los Angeles. This show is not for anybody with a weak stomach, but that’s where the weed comes in.

Now if anybody loves a good drug dealing story, it’s me. BMF on Starz is a tale chronicling the rise of the Black Mafia Family. Best known for their frontman, Big Meech, BMF is a new addition to 50 Cent’s family of drug-ridden drama shows. If the story doesn’t get you, the charm of Detroit in the 1980s will.

The One and Only Dick Gregory

The One and Only Dick Gregory on SHOWTIME documents the life of St. Louisian Dick Gregory and his rise to becoming a comedic and social giant.

Gregory can leave anybody speechless with his jokes and banter, but this documentary puts a different light on the man that was and is respected by so many.

A Man Named Scott is actually a documentary about Kid Cudi. Amazon Prime Video isn’t top-of-the-mind when people think about streaming services, but this story about Kid Cudi going from unknown to superstar is beautiful.

As a fan of Cudi, this film was amazing to see, plus, Cud’s made some of my favorite music to smoke too.

And I wanted to save the best for last. Questlove is known as one of the world’s best musicians, but now he’ll be considered one of the best directors. Summer of Soul on Hulu unearths lost footage from the Harlem Culture Festival in 1969. The music, the people, and the memories that this film elicits will have you dancing and singing around your home.

Now, this isn’t every great TV show that’s streaming or every strain on Leafly, but we promise you it’s a start on some incredible streaming pairings. Comment below or tweet us with your favorite show and strain combos.