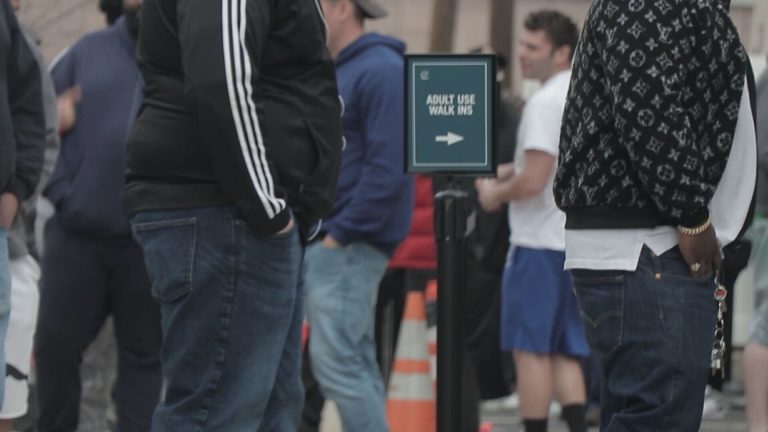 Here are Leafly’s Jersey-fresh takeaways from the raw data:

What’s next for the new ganja state?

The state’s cannabis board is reviewing retail license applications from micro-businesses and social equity applicants who will get the first shot to open recreational- only dispensaries.

The limited rollout strategy means Jersey’s debut numbers are far lower than they could have been.

Ayr Wellness shared excitement about being approved to serve adults in central New Jersey, in a release. “We are thrilled to be approved for adult-use sales in New Jersey and to have all three dispensaries cleared simultaneously to open for adult-use,” said Jonathan Sandelman, Founder, Chairman and CEO of Ayr.

In April, Ayr was not approved to expand with the state’s other ATCs. “We are disappointed with today’s NJ CRC decision to not grant Ayr approval to begin adult-use sales of cannabis,” the company tweeted April 11. “We were notified that our submitted application was complete & had every expectation that we would be part of the initial cohort approved,” the social media account added.

Regulators delayed day one of sales in March fearing that ATCs were not ready to handle the flood of demand. But a drama-free opening week should inspire more confidence in the industry’s capacity to expand. New Jersey is home to about 128,000 physician-certified medical marijuana patients, according to Bloomberg.

NJ state law allows companies to own a maximum of three retail locations. Ayr’s official statement added: “Central Jersey has the lowest number of dispensaries per capita, leaving its population under-served compared with the rest of the state. New Jersey is expected to become a highly influential state for the U.S. cannabis industry, and we are honored to help shape the market landscape from its early stages.”

What’s next for conditional license winners?

New Jersey law and its regulators will require 30% of licenses to be given to people of color, women, and disabled veterans. According to data shared last month, the vast majority of newly awarded conditional licensees represent social equity applicants who were most affected by the War on Drugs.

Tuesday’s new licenses are “conditional,” meaning awardees will now have a few months to find permanent real estate via lease or purchase and gain local municipal approval. Applicants for conditional licenses must show annual earnings of less than $200,000, or $400,000 if filing jointly.