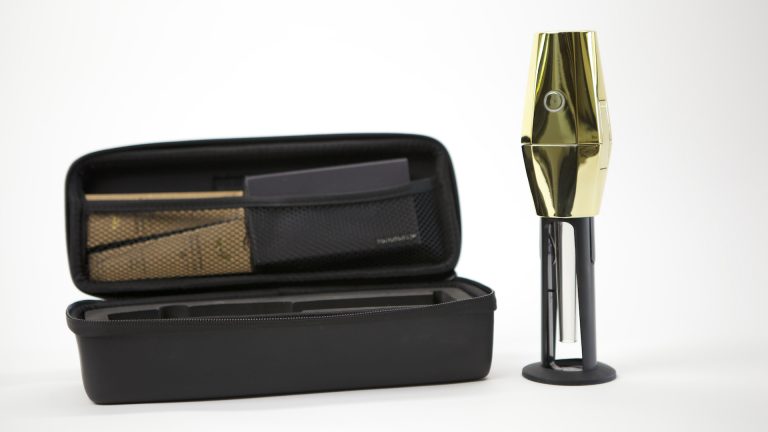 
It’s time to celebrate the father figures in our lives—the people who’ve played an indispensable role in making us who we are now.

Today’s canna-dads are a bit more updated than the stoner fathers of the ’60s and ’70s, so we’ve gathered some of the hottest items from the four corners of cannabis culture. But don’t worry, there’s also stuff for the Beatles-loving grandpa, too.

Whether they’re fans of fashion, music, coffee, or just relaxing in the garage, if they’re a fan of weed, Leafly’s got you covered. Here are 10 fantastic Father’s Day gifts that won’t stink up the joint.

The dedicated technicians at 710 Labs have developed just the thing for the Dad who dabs and has an important day job. These pocket-sized pens act like the stain pens you’re familiar with but explicitly formulated for cannabis concentrate stains. Price: $16.00

You can’t vape with this cheeky clock from leading hash vape maker Puffco—yet. Still, it’s sure to be a hit on Father’s Day. This hilarious clock started as a product in the Puffco employee store but was quickly released online due to popular demand. Dad joke and timepiece all in one, this is the Lebowski rug for any father’s den, garage, or smoke space. Price: $49.99

If coffee and cannabis are two of your Dad’s favorite things, Landrace Origins will be right up their alley. Each of their four coffees was designed to pair with certain cannabis strains. They’ll have fun stopping by the local shop to pick up some Durban for this freshly roasted Congolese from southern Kivu. Or some Super Lemon Haze, which pairs with their Kenyan coffee’s notes of grapefruit and cacao. Price $38/1kg

Dressing like a mushroom dealer—excuse me ‘cannabis couture’—has become a new norm, and you know who did it first? Dad. Lace him up in the latest. Broken Promises describes itself as visually fusing counter-culture with distorted reality. Together with one of California’s most beloved cannabis brands, they’ve created two capsule drops of fantastic clothing. For Father’s Day, we recommend going big and getting the two-piece Invasion sweatsuit from Alien Lab’s website, add the shirt if you’re feeling generous. (not available in 3x). Price: $69.95 top / $32.95 shirt / $64.95 bottoms

Known as “the accomplice,” this stainless steel flask holds 5 oz. of liquid and has a recessed stash compartment that can hold around 3-5 joints, depending on if your Dad rolls hooters, pinners, or hog’s legs. This is the perfect gift for any father who appreciates camping and music festivals. Price: $30.00

In case you’re Dad’s into collecting LPs, here’s a three vinyl set curated by Seth Rogan and Evan Goldberg. Each one was designed to pair with different varieties of cannabis. Sativa includes tracks like Syl Johnson’s “Thank You Baby.” Indica grooves along with songs from Khruangbin and Durand Jones. Hybrid brings a mix of tempos from Franciene Thomas, Lion, and Richard Swift. Clocking in at around a half-hour per record, this set of music to smoke to even includes a felt slipmat. Price: $95.00

Flower Mill might say they’re not your Dad’s herb grinder, but we’re pretty sure they won’t give it back after trying one. This grinder blows down any of your favorites by using a proprietary rotor to move your cannabis across one of five customizable screens, milling your flower to beautiful rolling consistency (hence the name). There’s a standard model made with aircraft-grade aluminum or a premium version made from stainless steel, and each can be fitted with an optional fourth chamber for catching all that kief. Price: $90.00 premium / $74.99 standard

To celebrate the anniversary of Harrison’s classic “All Things Must Pass,” Dad Grass partnered with George Harrison’s estate to release this ridiculous homage. The bundle includes a custom rolling tray, button pack, bumper sticker, rolling papers, and ashtray all themed to this ground-shaking solo album. Along with this, he’ll also receive a specially designed 5-pack of “All Things Must Grass,” a relaxing CBD/CBG blend of Dad Grass cleverly disguised as a cassette case. Since there’s no THC in it, it’s legal in all 50 states. Perfect for super straight-edge, zero-tolerance dads who can’t hang anymore, but want to play along. Price: $80

This $200 automatic grinder steps right out of that old mall gadget store for dads, Brookstone. The Banana Bros ‘Otto’ is battery-powered, simple, intuitive, and delightful to use—filling pre-shaped paper cones up for twisting in a jiff. If your old man has arthritis, or, say, tore his rotator cuff hitching the boat and needed surgery, give him a hand with the doobies. Just get extra paper cones, because these dudes in retirement puff tough. Price: $199

This one takes a little more effort, but trust me, they’ll love you for it. Porto’s Bakery is a legendary Southern California institution, famous for its cakes, pastries, and savory treats like the Potato Ball. ‘RSO’ stands for Rick Simpson Oil—a potent edible weed oil enjoyed by cancer patients, and psychonauts alike. Both are available for delivery: the signature mix of potato puree and picadillo covered in a crispy panko crust can be delivered frozen; the hash oil is on tap from dozens of LA delivery services. Cook those Balls, make a tiny hole, drop in a drip of RSO, and celebrate the twilight of the patriarchy. Price: $16/dozen; $32/gram of RSO.

How did we do? Leave a nice comment below.

Writer and designer Matt Jackson started in the California cannabis industry in 2004. Jackson holds a BA in Creative Writing from Humboldt State University. His work has appeared in Leaf Magazine, SF Station, Skunk Magazine, and the North Coast Journal.

Cannabis Culture News LIVE: Big Win For Marijuana in Canada, But the Fight Continues in Vancouver

MY THOUGHTS ON CANNABIS LEGALIZATION IN CANADA